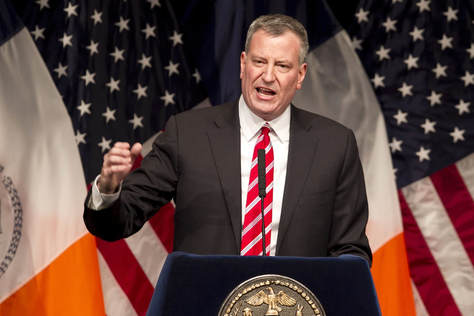 Mayor Bill de Blasio
Would New York City  blockade the way into the bike lane at Downtown Manhattan from motorists without the killing of eight people on Tuesday?
The question arises following news reports showing a tractor operator delivering a concrete slab on Thursday to blockade the bike lane to prevent vehicles from the lane.
Members of the public have started asking questions, whether the blockade, which many people think should have come earlier ahead of the Tuesday attack, is coming too early or too late.
Of course, many people see the latest blockade as reactive and not the type of proactive measure they expect from sound leadership. Very clear that the reactive measure cannot bring back those killed, but will prevent future loss of lives.
The reason for the judgment on the New York City leaders' reaction to the attack and killings of Tuesday is understandable, because according to observers, the use of a truck in Downtown Manhattan on Tuesday was not the first car or truck attack by terrorists in some developed countries.
People are saying that the act of using a car or truck by terrorists began way back in July 2016 in Nice, France. And it occurred again in December of the same year in Germany, before the London incident of Marcy 22, 2017, and followed by the attack and killings in Stockholm on April 7. The act was repeated again in London on June 3 and in Barcelona on August 17, according to a new York Post listings, of how terrorists have been using vehicles in deadly attacks.
People are asking whether two years are not enough for serious leaders who are proactive and who have intention to protect their people, to wake up and ensure blockade of spots like the one used by the terrorist in Downtown Manhattan. People are saying that there is nothing as painful to see that there is something that could have been done to safe lives, but not done and resulted to loss of precious lives.
Curious observers say that this is bad for the city's mayor Bill de Blasio's run for reelection, because if the terrorist is charged in the court of public opinion, the mayor's office too will be charged along as an accomplice - for failure to have the concrete slab in place to prevent the terrorist getting his way into the bike lane.
It is obvious that if the concrete slab has been in place before Tuesday, the terrorist will probably have resolved to go and commit suicide elsewhere than killing innocent people on West Side highway. News reports said that the terrorist carried out a trial run of his attack before he carried out the attack.
The terrorist probably chose the Warren bike lane for the opening there and not the Vesey Street bike lane, because of a bollard that was there as a preventive measure - to disallow any vehicle getting on the lane..