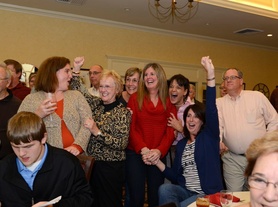 Republicans savor victory (Courtesy: newtownbee.com)
Analysts have been busy dishing out reasons voters in the United States favor the GOP in the midterm elections. First reason they have given is the Americans needs a change on how politicians play politics in Washington; second they say that the economy is second reason and three they say voters say the country is in a wrong direction.
Some see the change as a referendum on Barack Obama and the way he has been governing. Some analysts say the Democratic Party's loss in the polls doesn't mean a message to the Democrats alone, that the Republicans will also need to show they can govern, while others see the development as good for democracy, though it may be another way to a gridlock between the presidency and the Congress.
Before the elections and Republicans' victory, analysts had said part of president's plan was to roll out an agenda for immigration reform that will give undocumented aliens pathway to citizenship using executive power. Obviously, the president and his staff may have seen defeat starring the on the face before the polls.
Many people are asking now how feasible the president's plan to roll out an immigration reform agenda that victorious Republicans are known to disfavor. Observers are very clear about the new development that the president has to evolve new ways to deal with the Congress to get things done and the mouthing of using executive powers to maneuver the Congress can no longer work.
Part of the message from the load of analysis that is coming out following Tuesday's routing of the Democrats at the poll is that Americans want the presidency and the Congress to work together to get things done.
NEWS AND FEATURES
News & Features Around The World