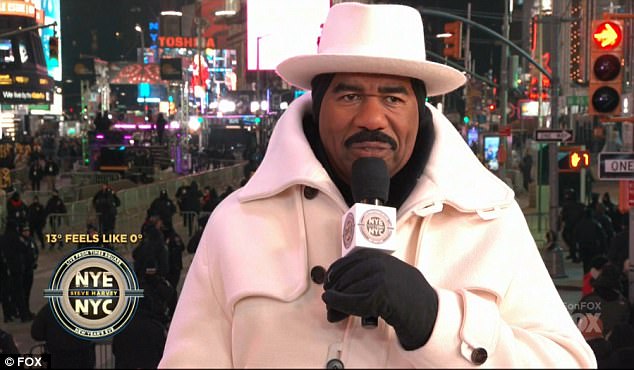 Harvey Steve at Times Square leading revelers into the new year (Courtesy:DailyMail)
There is a guy in New York, who says that he knows well that the year 2018 is new, but that he will have to wait through to December, to be able to say whether the year is a happy one or not.
Accoding to him, he doesn't want anyone to force him to ascibe meaning to a year that he has not experienced its harbingers.
First, the new year has been heralded by maddening cold in his own part of the world. The last two weeks or so of last year has been like fire experience for residents, who cannot afford to stay indoor without venturing outside into the frigidly cold weather.
The hard cold has followed humanity through into the new year's transformation from last year. Many people wonder how revelers were able to manage the cold weather through the night at the Times Square awaiting the ball to drop to usher in the new year. Harvey Steve's costume for the night spoke  much about the harrowing cold. Look at the writing above the NYE logo that says "13 degree but feels like 0 degree."
Of course, some people think that whether a year is a happy year or sad year is personal, based on individual experiences. It is believed that a year may have been ushering in happy tidings for the dastard events of the last four months of the year from September to December turn the tide from happiness to sadness. .
Imagine the death of over 180 people in the Philppines seven or eight days to the end of last year. Imagine the fire incident in the Bronx in the United States that killed 12 people. Imagine the news of the death of a whole family in a crashed chartered flight in Costa Rica.
How can anyone describe any particular year as a happy year for millions of people around the world, who are not certain they will get the next meal? Are people under political oppression and deprivation from leaders who don't know they have to ensure sources of livelihood for their people also having happy years?
The one percent number of people in the upper class of the society can be described as happy, and that is if they are happy seeing the 99 percent of people living in near squalor or endless struggle for survival. People in the 99 percent know that whoever say they are happy is deceiving, becuase aside from the joy derived for receiving a check after work, there is no joy left after the check has gone into the bank for the payment  of mortgage or rent and other bills.
It is for the lack of joy in the hard life here on earth that has made people to believe in stories of a possible paradise somewhere after death. It was Christ had a massive followership that transformed into christianity and uhammed had a massive followership that transformed into islam. The joy of Christians became manifest in the Acts of the Apostles, when everything belongs to everyone and no particular person claimed to own anything. Anainis and Saphira who did paid darely for it.
True Moslems know that vanity upon vanity is vantiy. It is why Moslems bury their dead as soon as an adherent dies and with a piece of white cloth, no matter the level that the dead occupied in his or her life time. The situation today is that people are working so hard with little to show for it and the search for happiness making new modern pastors ainto millionaires, turning collections from poor and despairing members into personal wealth.
Yes, people need happiness. They are seeking and asking for governments that would be responsive to their needs, for them to be happy and not to work from January to December every year with life's burden, like the one carried by Prophet Ezekiel when uged by God, for him to be a sign to the princes and the people around them.
​    Just as there seems to be nothing to be happy about in a transformation from an and worn out old year to another uncertain year, the same is applicable that there is nothing new about a year. Every year, the ceremonies at the Time Square and similar ceremonies in other parts of the world have become age old.