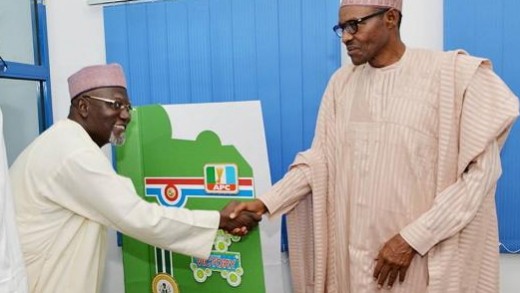 Lawal and Daura President Muhammed Buhari
Facts emerging from political events in Nigeria on Tuesday show that the country's democracy is not only in danger of derailment, but that the country's democracy is till banana in nature. Nigerians at home and abroad watch with unbelief how armed and camouflaged men barricade the National Assembly's entrance.
The climax of Tuesday's episode in Nigeria was the challenge of the the camouflaged armed men by a female member of the house of  representatives, who dared one of the armed men to shoot her, ordered the camouflaged men to return to their station, and a statement that if President Jonathan had acted the way of the current President Muhammed Buhari is acting, whether Buhari would have ever become president. The video went viral among Nigerians.
Of course, the armed camouflaged men lacked enough ball to shoot, just like their unknown sponsors. But the drama that has followed also shows the real sponsors of the barricade at the National Assembly lack the ball to show their faces and tell the public the reason behind their illegal act.
Instead, Nigerians have merely been told that one man, Lawal Daura, who until that Tuesday was head of the country's state security, had been relieved of his post. Later, the media reported that Daura was arrested, but his whereabouts unknown! And the media reports began a lace of Daura's bad manners as an administrator.
What the Nigeria's presidency had said by its termination of Daura's job is that Daura was that Daura was the only actor, who woke in the morning or before that morning, ordered his camouflaged officers to barricade entrance to the National Assembly. If he did, why? Was it to overthrow President Buhari, his boss and mentor, by first taking over the National Assembly?
On Wednesday morning, newspaper reports begin with the agreement between the president and the acting president for Daura to be relieved of his post, without any question asked whether or not Daura was the only actor in the barricade of the National Assembly.
Nigerians know that Daura could not have been the only actor in the decision to barricade the National Assembly. Aside from the fact that Daura would not have been the only person in the drama leading to the barricade of the Assembly, no one has asked the reason for the barricade.
Of course, Nigerians know the reason for the barricade and the persons involved, and who have all have back tracked, speaking through their media handlers and loyalists, after the failure of their plans. But the question may never go away about whether the barricade of the Nigeria's National Assembly on Tuesday was Daura's coup or that of the ruling party.
Many Nigerians are already saying they would not be surprised, of Daura emerges at a higher post in the future, because of his closeness to the president. Moreover, it is said that all those who acted to blockade the National Assembly on Tuesday should not just be arrested or be kept away from the public, but be tried for treason. And not just sacking Daura and closing the chapter.
Widget is loading comments...
NEWS AND FEATURES
News & Features Around The World