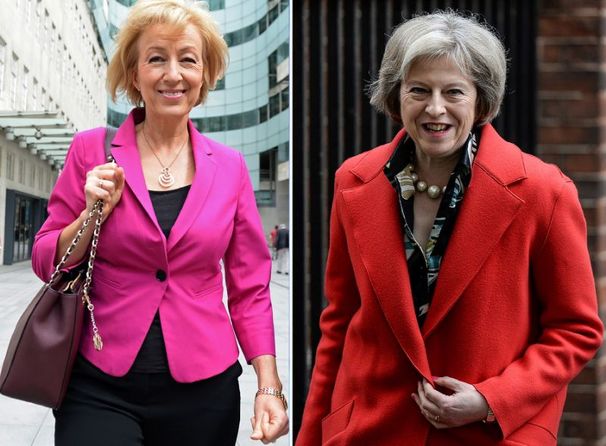 Andrea Leadsom and Theresa May (Courtesy: www.yahoo.com)
One major argument women often put forward against men's domination of the political landscape, especially in countries where men's leadership seem to be failing, is that they be given a chance to lead to show they can do better than men.
​    Unfortunately, very few countries have elected women as their leaders, despite all charges women contenders level against men's leadership.
Britain had margaret Thatcher. The country seems to be on road of making way for another woman leader. It is no longer in doubt that a female prime minister is on the way in the the United Kingdom, part of the smoke from the referendum that has pulled the country out of the European Union.
The next prime minister will either be Theresa may or Andrea Leadsom. This is as certain like the difference between day and night or like the difference between male and female physical structure. All the male contenders in the country's running for the prime minister's office, including the the guy who backstabbed Boris Johnson to emerge the Brext leader in the run have been edged out.
A woman is coming from Britain, another woman, Hillary Clinton,  is prepping for the battle of her, life to be the president of the United states. Victory for Clinton in her upcoming battle against Donald trump of the Republican party is not as certain as the case of who will be the next PM for the UK. The question that curious observers are asking is about the effect that the political development in the UK may have on the political development in the U.S.
The U.K already a history of Margaret Thatcher as a female prime minister, unlike the U.S. that has never elected a female president. And one of the major political question in the U.S. is whether the U.S. voters are ready to elect a female president. The second question has always been on the table at every presidential election period. It was asked the last time that Clinton ran against Barack obama and she was edged out in the primaries by Obama.Many people said at that time that the U.S. was not ready for a female president.
Is the U.S. ready for a female president now? It is a difficult question to answer. The Democrat are seem ready to elect their presumptive nominee, but the republicans and the independents are not convinced that a female president is what the country desires now. The number of new Republican voters in the last primary election is higher compared to the turn out that of the Democratic Party. And the polls are showing Donald Trump to be favored by the independents in comparison to Clinton.  A
Virtually all the polls, safe one, have Clinton ahead of Trump in term of if the election is held today, who will be winner, but Trump is also up in one of the polls by two points. Another reliance past historical frame was when Margaret Thatcher was prime minister in the UK and JImmy Carter was president in the U.S. When Carter left office with Thatcher still in the saddle, Ronald Reagan, a Republican was elected president in the United States.
By October, a new woman prime minister will emerge in the U.K, and like Jimmy Carter, President Barack Obama will be leaving office after the elections the U.S. in November.Will history be repeating itself with  Tory female prime minister in the UK and Republican Male president in the U.S or a Tory female PM in the UK and a Democratic female president in the U.S? If the latter happens, it will mean a female prime minister in the U.K and a female president in the U.S, just as there is already a female Chancellor, Angela Merkel, in Germany.
Then, it will mean the arrival of the amazons. But hold your breath. They are not here yet. And their arrival is uncertain, until after the elections in the U.S.
NEWS AND FEATURES
News & Features Around The World