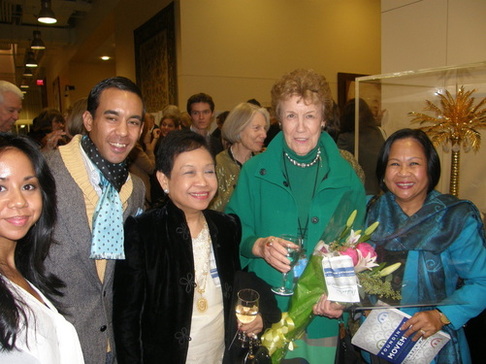 Founding A Movement, Women's World Banking,
1979-1990 is a compendium about the beginning and growth of micro credit for less privileged women known as
Women's World Banking, WWB. The story begins in 1975 at the first United Nation's conference for women in Mexico City.
The book opens with a compilation of  6 quotations subititled, Praise For founding a
Movement, proceeds with a note of gratitude by the author,  followed by a short note, a prologue, timeline-A Sense of History, and WWB Affliates' World.
It explains how and why WWB is Officially registered as the Stichting to Promote Women's World Bankng or SWWB. The word 'stichting' in Dutch means foundation.
But before the progress leading to the registration and foundation, there are activities recorded in the book worthy of note.
The pre-registration acitivities comprise the birth of an idea, thoughts to give the idea a life, determination by those privileged with the task to not abort it amid challenges,
benefit of dissent, can do spirit, conflicts and resolutions, words of men and women
who stand behind the founders toward the realization of a dream.
The Beginning
It is recorded in the first chapter, From Kansa's City to Mexico City, begins with a
rider, Too High Risk for Women that  shows the strength of WWB's foundation a
reflection of  Michaela Walsh's life's character and experience, as a woman and
an American. The character and experience are linked to her root and foundation
of public life laid by her grandfather, Patrick P. Walsh, co- author of congressional
proposal for the child labor law, eight hours work day and part of a struggle to ensure
living wages for workers. She has a natural talent of kicking obstacles off her path.
Her first demonstration of this act was her resignation from Merryl Lynch after a
denial of being part of the company's foundation in Beirut, embarks on a journey to
Beirut on her own to be hired by the same company. In Beirut she witnesses a new
culture and learns to question new assumptions, and grasps a knowledge that there
are many ways to achieve result. Her working abroad in other cultures, returning to
New York after learning of women's little access to the economy leads to a vast
acquisition of knowledge about problems that confront women outside the U.S.
Becoming a program associate at the Rockfeller Brothers Fund, RBF, turns into a
springboard for further actions, and going as a delegate to the first World Conference
on Women becomes a strategy. Yes, this book is about strategies of working to
achieve success in a difficult situation.
The book notes that Mexico City in the summer of 1975 reflects new understanding
of economic condition of women, based on a paper by Ester  Boserup, a Danish
economist and a writer for the United Nations who writes, "Women perform over 60%
of the world's work, earn only 10% of the income and own less than 1% of the world's
property."
The Idea and Crystalization
At the UN conference, Esther Ocloo of Ghana, during discusions of the problems
of women farmers and lack of access to credit due to lack of collateral appeals for a
women's bank. ChoKyun ,Rha, a representative of Far Eastern countries writes how
Esther Ocloo, a penniless orphan at adolsecence has received one quarter in cash
from an aunt as first money she has ever possessed and determines to  do something
out of it to change her future. She owns a glass jar, goes around collecting berries,
makes jam and sells it; it is how she becomes an enterpreneur, and understands the
importance of having financial means to begin a venture. The idea of women's banking
develops from there. After the meeting, the women retire into the an hotel room, and
begin drafting the resolutions for WWB. One of their discussions revolves around how
women would have access to power, and recalls how Michaela has said that unless
women have access to credit and  money, they all not have the power.
She brings a handful into the idea and keeps the contact. She is described as
powering and like a beacon working from beginning to end. There is acknowledgment
that there have been village credit unions before WWB, but don't serve the women. To
this, Ocloo says she is tired of those she describes as money lenders, and  says what
they need is a women's world bank.
Success
By the time of their next meeting in Amsterdam in 1980, the WWB has taken shape
and  their remark has become, "It will happen you said, and it did." Bill Dietel says at
the end of the day, it's people, not money, and not even ideas." Ideas are always out
there; the money is always out there somewhere. But nothing happens until a person
grabs the idea, gets the money and makes it go." Along with team spirit of interns,
volunteers and overworked staff the WWB's goal has been realized, history of its
operations from 1975-1990 documented in a properly edited and easy to read language,
representing the voice of all the participants and the paper works.