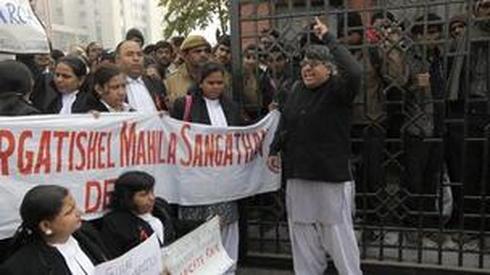 Part of protest against rape in India (Courtesy:bbc.uk.co)


The men who flogged, raped and threw a woman off a moving bus in
Delhi for which Indian women had claimed misogyny were formally
charged today for the woman's death, reports from India claim.
One of the lawyers who protested in the court carried a placard that said,
"Eradicate Rape," showing their level of disgust for the inhuman act visited
on the woman and her boyfriend attacked on their way from a movie theatre.
The gang rape case came to global attention mid December 2012, when
it sparked outrage and mass demonstration in India. It has been catalogued
as one of many rapes in the country that are rarely reported. According to
official reports, a woman is raped in India every 14 hours, and the country
has 93,000 pending rape cases. Women in the country view the medical
student's death from the brutal rape as a wake up call for the country's
leadership to save Indian women from rape and other degrading and
inhuman treatments.
Current demonstrations and demands by Indian women have affected
governance with the country's president's cancellation of a new year's
celebration, the armed forces cancelled the new year party, the ruling
Congress abandoned its celebrations and businesses scaled down across
the country. Women are asking for changes in the laws on violence against
women.
India women, like every other in the world face a situation where women
are blamed for improper dressing and are wrongly held responsible for
violence visited against them. This attitude forms part of what women here
are calling attention, and demanding punishment for rape offenders rather
blaming the victims of rape. They view a situation where nothing positive is
done to address crimes and other acts of inhumanity against women as a
demonstration of hatred for their sex.
The woman who was raped in Delhi on December 16, 2012, died in a
Singapore hospital where she was receiving treatment. She was cremated in
Delhi and her ashes scattered by her family in River Gange in the Balia
district in Uttar Pradesh State.
Many people have asked questions about the rampant cases of rape around
the world and what can be done to stem the tide. What is regarded as rape is
different from country to country,  based on culture and law.
In civilized countries, sexual acts must be consesual, including between
husband and wife. And if it isn't consesual, it is rape.