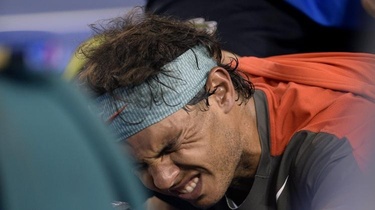 Nadal in pain
Spectators watched the drama of an unfit champion and a new star itching to be a champion, and the former trounced by the latter. This was the spectacle at the Australian Open that witnessed Stanisla Wamrinka regarded as a rookie, defeating Rafael Nadal to become the new tennis champion.
The new York Times reported that Wamrinka bullied Nadal and described it as something that rarely happened and also never in a Grand Slam tournament. The report said further that Wamrinka served and volleyed, and almost said virtually nothing spectacular about Nadal.
Understandably reports said Nadal was struggling with a back issue."It is a tournament that I really had some troubles physically in my career. And something that is painful for me. But that is part of life. That is part of sport. It is not the end of the world. Is just another tough moment," Nadal told the BBC.
Nadal reportedly left the court for treatment when Wamrinka was at one of his best to the annoyance of the would be winner and spectators. Nadal who had never been defeated by Wamrinka in all their past encounters was in the prospect of losing to a new winner to be recorded as his first and great win against Nadal.
"The last thing I wanted to do was to retire. I hate to do that especially in final.It 's not the moment to talk about that. it is the moment to congratulate Stan," Nadal submitted to the emergence of a new tennis star and the Australian Open champion - Stanisla Wamrika of Spain.
NEWS AND FEATURES
News & Features Around The World