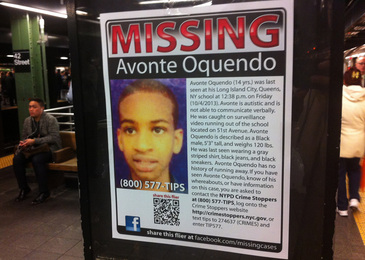 One of the postals around the city
The remains of a human body discovered in a swamp in Long Island City area of New York yesterday was being touted as likely that of Avonte Oquendo, 14 year austic Queens boy declared missing in October 2013, after he reportedly walked away from school at about 12.38 pm and had not been seen since then.
A lawyer representing the family had said at a press conference attended by members of the family that the body found belonged to Avonted Oquendo. But the confirmation will have to wait until after the DNA analysis that will take about two weeks.
Reports said that the remains were taken to the Queens County Morgue where the medical examiner will determine who the remains belong to and the cause of death.
The police said that officers who responded to a 911 call found a possible arm and legs on the rocks in College Point. Human torso, some clothing and a dark-colored sneaker were also found in the water.
Additional search are being conducted with police boats, helicopters, detectives and water units for more evidence on Friday after the remains were discovered around 7:15 p.m. Thursday.
If the DNA analysis confirms the remains found as that of Oquendo, it will be an end to an almost four months of search all over New York, where postals with Oquendo's photograph have appeared in all parts of the city, train stations and train cars.


"
NEWS AND FEATURES
News & Features Around The World