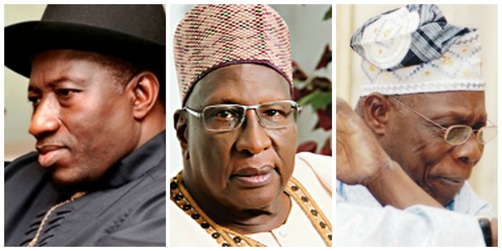 Jonathan, Tukur and Obasanjo
There are disagreeing reports from Lagos Nigeria about the resignation of the People Democratic Party''s chairman, Bamanga Tukur, from office. The Punch newspapers reported that the chairman has quit his office; the Premium newspapers published a statement credited to one of the chairman's aides that the chairmen remains in office and Sahara Reporters in New York says Tukur . There are meetings upon meetings reportedly being held in the country's Aso Rock - equivalent of the White House - discussing the chairman's fate, and how to save his party from bleeding, resultant  of defection of members to an opposition party.
Some notable defecting members of the party have said they are leaving, because the party has abandoned the tenets of democracy; some say it is President Jonathan's fault and others have been holding the party's chairman responsible for the party's fate. No one has said that the realignment among Nigerian politicians is caused by efforts to re-position themselves, in readiness for 2015 presidential election, office and booty sharing.
It is not only in Nigeria that what seems like a fever of of the Babel has gripped the political class, but it is also from Nigeria that the recent fever of what seems like a cultural Babel has taken root. President Jonathan signs a bill criminalizing homosexuality into law and the United States John Kerry says the law is against freedom of association and assembly among others. The United Kingdom is reported as thinking about withdrawing aid to countries that are criminalizing the sexual habit has created its own Babel. The report reminded the public of President Barack Obama's Senegal experience, where the Senegalese president taught the American president about the differences in culture between the West and Africa; that Africans have not forced polygamy on the West and the West has no right to force homosexuality on Africa. Almost saying that it is unacceptable for the civilized countries' to undo the Babel that God has ordained.
Undoubtedly, there is a few number of homosexual population in Nigeria, but a whooping 98 percent of the country's population supports the new law against homosexuality. Many Nigerians see democracy at work, even though the same democracy has hardly benefitted Nigerians in economic terms. Many Nigerians are angry against their government for failure in addressing their economic needs, but they have rallied in support of the same government for its decision against a sexual habit they see as an abomination.
A whole lot of people see the direction that the world is going as a reminder of what happened in the book of Genesis in the Holy Bible, where it reported that God sees what is happening on earth that the sons of men have one voice and are trying to build a tower to reach heaven and God confuses the language and scatters their plan!
With the Babel that has hit the ruling party in Nigeria, President Jonathan must have learnt a lesson that the only mark a politician can leave in the sand of time is work to alleviate the peoples' social and economic burdens, and that any agreement with politicians in the same boat not target toward helping the people and the country is tenuous.
Widget is loading comments...
NEWS AND FEATURES
News & Features Around The World