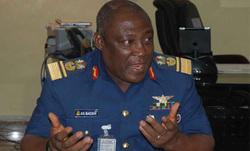 Badeh (Courtesy.www.vanguardngr.com)
Nigeria's Chief of Air Staff, Air Vice Marshal Alex Badeh, said the Nigeria's military has located girls abducted from their school hostel in Chibok. But he was unable to verify his claim other than that the military would not reveal its secret.
There is no way to confirm or dispute the military chief's claim. He could be right and he could be wrong. He could have said the truth or the opposite, to get off the protesters' hook.
But he scored a high mark that the military would not use force to free the girls to avoid putting them in harm's way. He also seized the opportunity to speak to people who have been denigrating the Nigerian military as corrupt and inefficient.
From Badeh's speech to the protesters, it is deducible that the Nigeria's military wants the support of the Nigerian people and not condemnation on the effort being made to free the abducted girls. Badeh's  assurance that the girls would be freed is the same like the world has been hearing since the news of the girls' disappearance.
Some reports have said the Nigerian government reneged on negotiation with the Boko-Haram group after President Goodluck Jonathan's participation in the Paris conference. The reports say that 50 girls is to be released in a swap for 100 Boko-Haram prisoners, and the reports have not said anything as to why the government reneged on negotiating with the terrorists.
Now the the military chief says that the military will not use force to free the girls to avoid harming them, is the world to believe that the government is negotiating with the terrorists and does not want the public to know about it? Can it be said that the government reneged on negotiation for the release of 50 girls because it wants the entire 234 girls released?