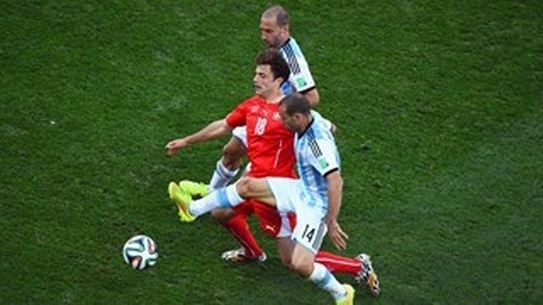 Argentina players and Switzerland player in a dwell during their round of 16 match
Belgium defeated the United States 2-1, in the last of the round of 16 matches, played at Arena Fonte Nova, Salvador on Tuesday. Belgium will play Argentina in the quarter finals.
De Bury scored Belgium's first goal three minutes into the extra time, after full 90 minutes of play. Lukalu put in the second goal about 12 minutes after the first goal.
Green scored the US only goal 2 minutes after Lukalu's seemed to have scored the decisive goal for Belgium.
All pressure by the US team to equalize was abortive.
Belgium joins other teams like Brazil, Colombia, Argentina, France, Germany, Costa Rica and Netherlands for the quarter finals. The quarter-finals' pairing seems to make an easy prediction possible of teams that will move into the semi-finals, safe only the match between Brazil and Colombia.
Unless surprise happens in the match between Netherlands and Costa Rica, Netherlands is likely to triumph; Germany may likely walk over France and Argentina may tame Belgium. It will be hard fought quarter-finals, just like the world has witnessed in the preliminary and the round of 16 stages.
NEWS AND FEATURES
News & Features Around The World