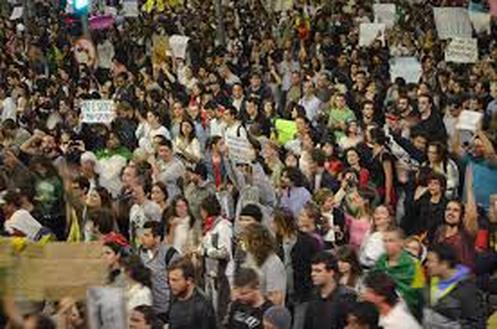 A cross section of Brazilian protesters
Government's ostentation and disregard for essential needs provision are manifest in the Brazilians rage that is seeking to mar the World Cup fiesta in the country.
For almost a week, the football loving nation, known for highly skilled football players has been struggling to contain protests about economic discontent, but capable of halting the world cup, which government officials said came as a surprise, but promised to seek solution to its cause.
The BBC reported that the unrest in the country was caused by transport fare hikes in Sao Paulo, but it grew into a broader discontent over public service and corruption. This is explained by continued protests, despite the cancellation of the fare hikes by government.
If the content of a video interview of Maria Lucia - a supporter of the protests - by the New York Times can be used as a measure of the protests,  it will be clear that fare hike only helped released the bottled up rage over deteriorating standard of living among the needy in the country.
"I am in favor of this.You have the right to. These politicians are all...They are fine. They don't ride inside these buses. The world cup is show for the whole of Brazil," Maria Lucia said with a reference to her rent she described as absurd.
Another Brazilian said, "But this is just the beginning. With all the corruption, all the indignation, Brazil really woke up." Another woman said," The only thing they gave us is stadium. If a child is sick, we cannot take him to a stadium."
An unconfirmed report says that protesters are angry about the cost of the stadiums being built around the country for the forthcoming world cup tournament amid unattended suffering of the people. It was said that most Brazilians had thought that all the world projects were undertaken by private organization before they knew it was government business. And Brazil is reported as host of the world cup in 2014 and the Olympics in 2016. The daunting costs of preparing for these games must have bothered the Brazilians, a news website reported.
An observer says that the Samba - a popular form of dance in the country - has been moved from the football pitch - where players show off with a goal against opponents - to the streets in shows of  anger against government.
The government has been rattled. It reversed the fare hikes across the country that caused the protest, and promised to do more to address the pent up emotions, which it described as real.