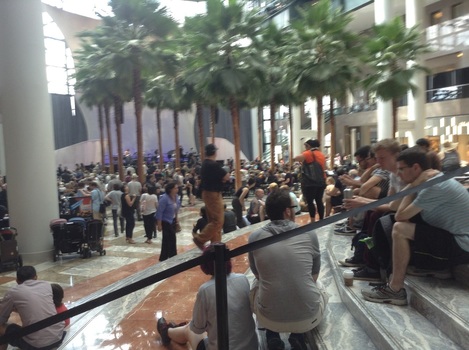 Brookfield Place and Father's day fun seekers
The events' Center at the Brookfield Place on West Street and Vessey Street in Manhattan, opposite the World Trade Center, was filled on Father's Day. There was also a band on the stand that entertained visitors and fun seekers.
The reporter stumbled on the rendezvous, while he was crossing to take the Path Train. The architectural beauty of the edifice added picturesqueness to a gathering that boomed with excitement.
The sight of the Hudson River behind the band; the sea of human heads in front of the band and behind, another large number of people seated on the steps all the way up to the viewing of the Downtown from the foyer could not be anything but a Father's Day wonder.
The Palms in front of the band stand provided a shade from the sun. Standing on the ground facing the escalator that leads to the Path gives the picture of one beholding the entire Downtown Manhattan with skyscrapers right in your sight.
A man holding an office bag said he wished he could have time to be here, describing it as a perfect place for a father's day. As he navigated the steps down the to go and connect the escalator leading to the Path, he was quietly told by a security guard that no one was allowed to sit on a portion of the steps to the left, where you turn to the escalator, to allow human traffic from the building to the escalator.
A guy said it is not his first time at the place and that he had not been seeing Downtown like this before now. he has hardly completed his statement, when a man who heard his remark said that a facade that blocked the Downtown from that spot was taken down two days before the Fathers' day.
"I know in Downtown as I have always, but today I the whole have Downtown before me. without the glass enclosure that separates this from the World Trade Center, I can walk from here across. This is beautiful."
"Is there a difference between this place and the World Trade Center?" an onlooker asked.
"Yes, I think there is a difference between the World Trade Center and the place where we are standing now," a guide explains. "The place where standing is called The World Financial Center and the other place outside this place is The World Trade Center."
"But now the two places seems like one. On the surface, they are separated by a road, but underground they are almost like one single place. You can go down the escalator, walk the long distance to connect the Path and walk up another sets of escalators to connect the road and process papers to access The World Trade Center."
What do you expect from the finical district and a place regarded as the heart of the district? it is why the Brookfield Place that houses the World Financial Center welcomes visitors with "Welcome to Our Place" and tagged the place the heart of Downtown Manhattan.