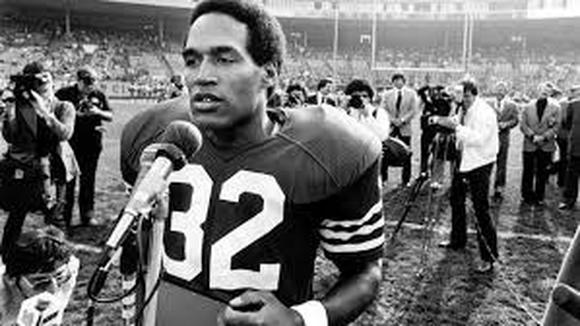 Oj. Simpson in his heydays as a football hall of fame
The news of the eventual parole of O.J. Simpson came like the victory of a presidential candidate in a hard fought election.
And many people wonder how the announcement of a robbery convict has enjoyed so much popularity.
People who know Simpson's history said the reason is because of Simpson's personality as   former football hall of fame, and a survival from the trial of a double murder.
Many people believe that the foundation of Simpson's fame was his days as a football playing star, and that his trial for the murder of his former wife and another man, came on the heel of his fame as a football hall of fame personality.
Thus when a man was asked on a television program on Sunday, whether he thinks Simpson has served his term, and he says that he believes Simpson had served his term and that he expects that Simpson should go out of spotlight to be safe, he seems to have said the impossible. The impossible here is expecting Simpson to go out of spotlight.
Do celebrities go out of spotlight? Simpson is regarded as a celebrity of celebrities and not just a mere celebrity. Many people say that to ask Simpson to go out of spotlight is like asking the fish to be taken out of the water, an important input for the fish's existence, and without which there will be no life for the fish. Spotlight is here being confused with trouble. The answer that Simpson should get out of spotlight is confused with Simpson should get out of trouble. Spotlight is for celebrities a much needed air require for breathing and staying alive.
Everyone agree that Simpson has served his term for the robbery case. People say that nine years in the slam is enough punishment for the robbery case. What a large number of people are saying silently is some people who try to connect his robbery case to the murder case of his wife, from which Simpson had earlier gained freedom.
People need to be educated that Simpson had been freed of the allegations that he killed his wife and another man. And that the nine years he has spent in jail for robbery has no link to the earlier case of alleged murder.  They are two different troubles that happened at different times. He was freed of one and convicted of one..
​   But whether Simpson will get out of trouble is another thing respondents are not sure he can, just as people are saying that it will be impossible for him to get out of spotlight.
HTML Comment Box is loading comments...
NEWS AND FEATURES
News & Features Around The World