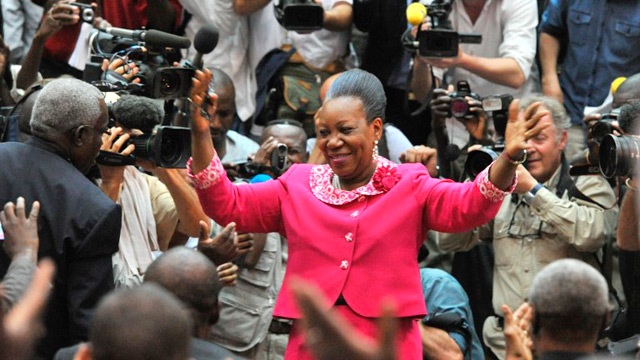 Catherine Samba-Panza
Catherine Samba-Panza - newly elected Central African Republic's interim president, has called on the African and EU countries for more troops, toward peace in the country.
The call came in a press interview following her victory in an election in which she defeated Desire Kolingba, and became the first woman who broke the glass ceiling in CAR.
"I call on my children, especially the anti-Balaka, to put down their arms and stop all the fighting. The same goes for the ex- Seleka - they should not have fear. I don't want to hear any more of murders and killings," she said in a victory speech reported by the BBC, and attributed to the Associated Press.
Samba-Panza, 59, said to be accepted to the warring parties in the country made it known that starting from the moment of her election, she is the president to all Central Africans.
Reports show that her neutral political figure had been manifest when she was being considered as mayor for Bangui with her predecessor - Michel Djotodia - as leader. Unlike, Djotodia - Moslem, Samba Panza is a Christian.
CAR has been enmeshed in conflict following Djotodia's power seizure in March 2013, and followed by attacks and counter attacks between anti-Balaka who are Christians and anti-Seleka who are Moslems. Widespread killings have led to over a million refugee running away to save their lives and prompting the stationing of about 4000 African troops some 1600 French troops as peace keepers.
Samba-Panza's initial assignment is stopping the senseless murders that have drawn global attention to the country, and that observers say may have informed her victory speech with a reference to 'I call on my children' as a rallying point to begin a difficult job of restoring peace to a land in a grip of trouble. She will need to work toward removing the mob from the street and replace them with law and order.
Some observers say that the hope her election offers the country may have caused the cheers among members of the National Transitional Council following announcement of her election.
Already, she has made a quick request to the African nations and the EU countries to send more troops toward ensuring desired law and order.
NEWS AND FEATURES
News & Features Around The World