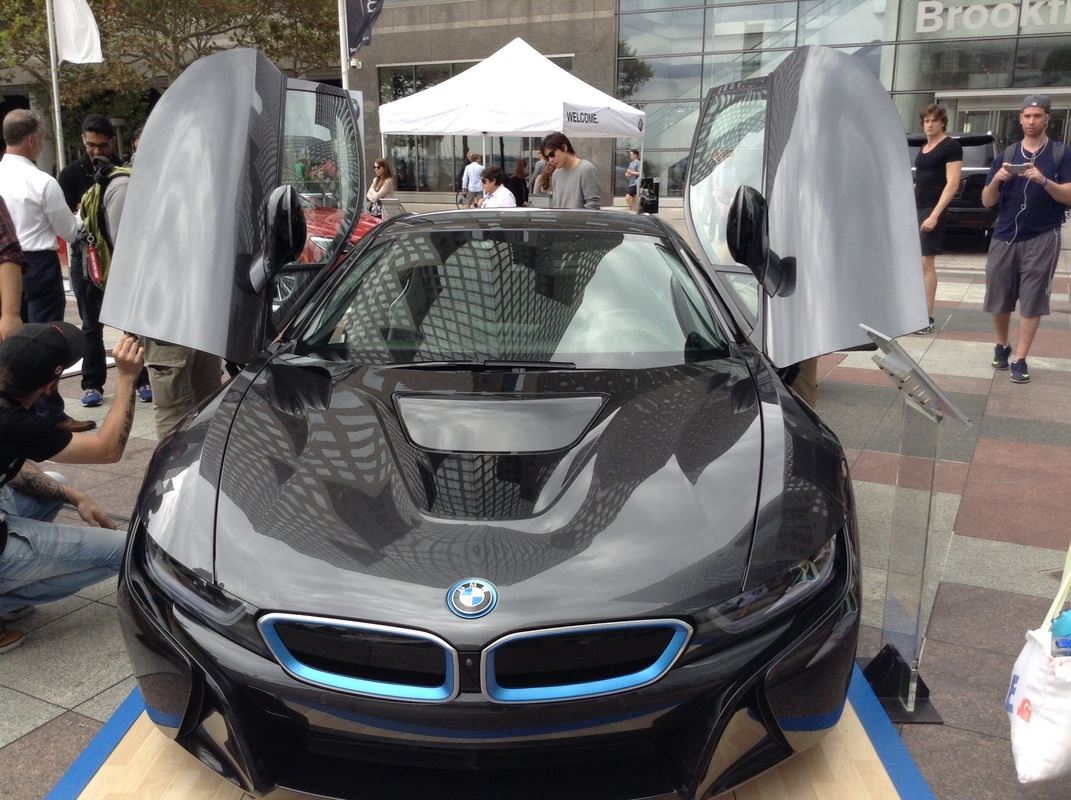 You navigate the escalator and as you come upon the upper level after the escalator, you see two Mercedes Benz cars packed facing the escalator. You begin to wonder whether the cars are being prepared to go down the escalator. Nothing is impossible in New York City. You look at one of the cars to your left and a sign post announcing the premises, Our Place is Fresh, engages your attention from a screen on the wall. Then, more cars come into sight, a little farther from the position of the first two cars separated with a facade that forms the high rise staircase, and under which sits Botega Venetta - a newly opened store.
It is a car show tagged New York Motorexpo and the venue is no other place than the Brookfield Place, Vesey Street, Downtown Manhattan, in a space between the facades of The World Financial Center, overlooking the Hudson River. This is a car show with a difference, having cars such as new models of Mercedes Benz, Lincoln, Lexus, Volvo, Ford, BMW, Tesla and Cadillac among others on the stand.
Mercedes Benz has 2016 AMG GT S and 2016 GLE Coupe; the latter is described as a growl that intimidates the road. The BMW has the first ever BMW plug-in hybrid with the power of a TWINPOWER Turbo engine and efficiency of an electric motor car for the best of both worlds. Cadillac comes with The CT6 - one of the world's lightest and most agile full-size luxury performance sedan. Ford presents 2016 Explorer Platinum and offers a beauty that is more than skin deep. Lexus has 2015 RC F said to be the next expression of Lexus performance and designed from the asphalt up. Lincoln introduces an entirely new Lincoln MKX - designed to stir emotion. Mini Cooper comes with S Hardtop 4'door - premium and not pretentious about leg space and compactness. Tesla is here with Model S P85D described as an evolution in automobile engineering.
In the real sense of the word, these are not ordinary cars. They all represent an expression in the automobile technology and  ultimate driving experience. It is the ultimate of every human desire. Most of the models are not just new, some of them are not even in the market yet, but being introduced into the market with billions of dollars going into their production, with anticipation of a world to welcome them in 2016.
The expo, managed by The Aspect Partnership LLC in association with Brookfield Property Partners, began on Sunday, September 2015. It is expected to end on Saturday, September 19, 2015. All said, the awesomeness of the all purpose center that the space within the World Financial Center has become, cannot go unmentioned. It is becoming a place one wants to pass through to reinvigorate after a hard day at work.
NEWS AND FEATURES
News & Features Around The World