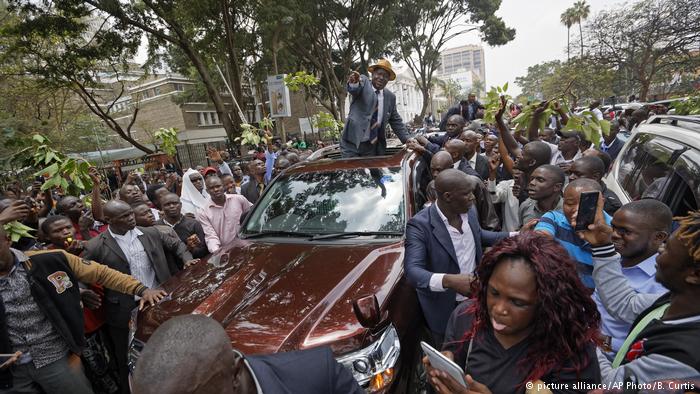 Kenyans celebrate
The news of the presidential election results annulment by the Supreme Court came like thunder. It vibrated all over the world, beyond Kenya.
It was almost unbelievable but true that the Kenyan Supreme Court judge were courageous enough to serve country and not personalities or the people in power.
The hour that the judges pronounced their decision was the time Kenyans who had been disenfranchised expected and waited for.
They waited and prayed, not believing their interest would be served, in a country where a writer disappeared on the day he was to launch a book and a manager of the electoral commission murdered eight days to an election day.
Another good thing was that there was no information about any attempt for the power in government to control members of the Supreme Court. The government as well as members of the opposition waited like ordinary Kenyans for the outcome of their arguments before the judges. Uhuru Kenyatta was vanquished. And Raila Odinga's light shines.
And the Supreme Court made Africa proud. The Kenyan Supreme Court restored hope to Africa. And when words filtered out that the election results were annulled and a new election ordered within 60 days of the annulment, Kenyans trooped out in celebration. It was not only Kenyans that celebrated the epoch decision making by the country's Supreme, all Africans and people around the world celebrated with Kenyans.
It was the opposition's day of victory against dark forces. It was Raila Odinga's day of victory and restoration of hope in his struggle to ensure that Kenyans votes counted. One can remember how he navigated the dangerous bends to arrive at a decision to go to court against an earlier decision not to got court. He was in a sate of confusion whether  to call out Kenyans to protest the results, baring in mind the loss of lives that already began with the police killing of protesters.
Although, there were reasons to believe that some powers tried to tamper with the election processes in Kenya, which consequence was the court's annulment of the election, there will be no way of knowing the powers that wanted to take Kenya back in its journey to free and fair elections. But developement casts a bad light on the powers in government and the electoral commission.
There are questions already being asked whether the electoral commission in kenya sa currently constituted can be trusted to deliver a free and fair election.
The hands of the electoral commission's chairman, Wafula Chekumati cannot be said to be clean enough to be trusted to handle the new election to be held within 60 days. The opposition party's leaders seem to have begun asking relevant questions early toward ensuring that all stones are left unturned toward ensuring free and fair election.