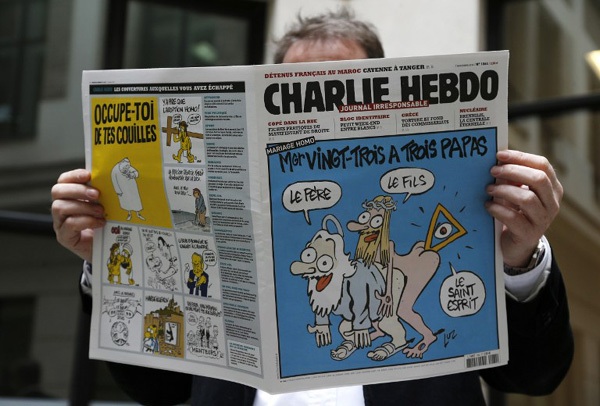 For the Charlie Hebdo magazine, today is a new day, another Wednesday, different from last Wednesday, exactly eight days ago, when gun men raided the magazine's office in Paris and killed 12 people.
The magazine is defiant of the terror's intention to control its editorial policy. Rather than be cowed, the magazine has reportedly printed a memorial edition, with yet the picture of a man who caused the terror visit to its office, on the cover. The man on the cover is depicted as crying, and saying he has forgiven all.
Reports say that today's edition of the  magazine has a print run of three million copies and have been selling like hot cakes, and the magazine's editors are thinking of printing additional two million copies on Thursday.
Someone said that people are curious to know what in Charlie Hebdo warranted the attacks on the magazine. The attack last Wednesday was not the first attack on the magazine's office. The first attack was reported as a fire bomb, and that the earlier fire bombing of the magazine's office led to the editor-in-chief's decision for an armed body guard to watch over him. The armed guard was killed along with him and others.
As we have all witnessed, the world regards the attack on the magazine as a moral equivalent of war on the magazine and the society. The society has undeniably been ruffled. One guy, Mbala, Mbala,  a comedian in France, whose job is also making people laugh, has reportedly been picked up by law enforcement agents, for making a comment seen as a support for the terrorists' acts against Hebdo and the society.
Mbala, Mbala says that the same freedom Charlie Hebdo has he also has,and doesn't seem to understand, why  the law in France is currently tipped against him.
But people perceive that for the government in France, human life is sacred and not for terrorists to cut down as they like. But unlike the government in France, Mbala, Mbala, like Charlie Hebdo knows no sacredness. Human life is human life. There is nothing sacred in the living and the dead. Nothing is sacred.
For Mbala, Mbala, there is nothing wrong for him to make comparison that approves terror act against cartoonists, irrespective of the number of people killed, just like the cartoonists themselves don't see any sacredness in a human photo, be it Muhammed or Jesus or French politicians.
Terrorists had attacked Charlie Hebdo and a supermarket in Paris. The attack on the magazine and Paris are attacks on freedom. But Mbala, Mbala is accusing the government that by depriving him the right to express himself, is attacking freedom. Every one is protecting freedom from being a pun, but freedom itself cannot talk. What an irony.
NEWS AND FEATURES
News & Features Around The World