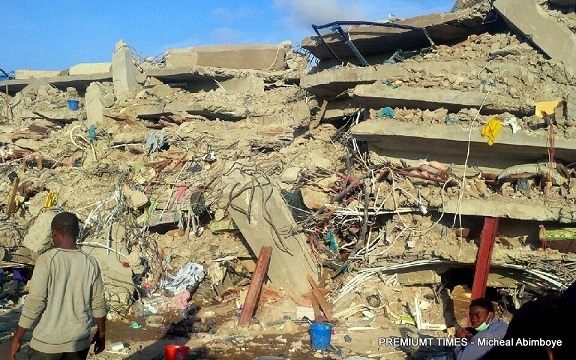 A church guest house belonging to Synagogue Church of All Nations collapsed on Saturday in Lagos, and killed 40 people.
The leader of the church, TB Joshua attributed the collapse to an helicopter that hovered over the building shortly before the incident, news reports said.
A video showing an aircraft, probably an helicopter flying past the building twice, is presented to the news media by the church leader. It was like the building sank.
Nigerian newspapers reported death toll from the collapse at 17, 22 and 39 respectively. But the BBC puts the figure at 40. The Punch newspaper actually reported 120 survivors in its headline and lead report, and two paragraphs to the end of report mentions 22 people die.
A young college student interviewed on the street of New York was shocked to hear that a hovering helicopter brought  resulted in the collapse of a building in Nigeria. He said it was a strange and that the hovering helicopter could not have caused the collapse. According to him, if a hovering helicopter over a building brought the building down, then it means the building may have defects and anything apart from a hovering helicopter is capable of the damage.
There has been no official statement from the housing ministry in Lagos State, where the church is headquartered.
NEWS AND FEATURES
News & Features Around The World