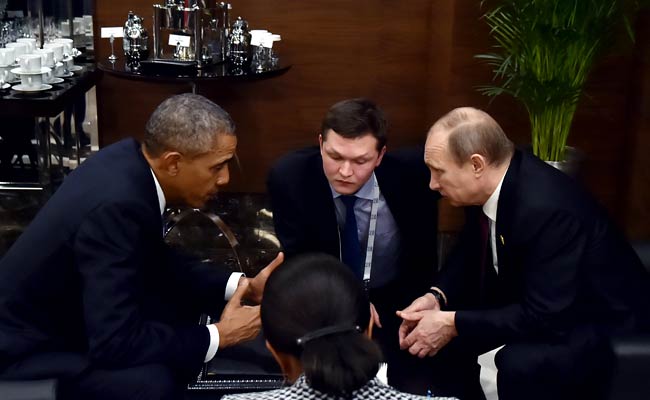 Presidents Barack Obama and Vladimir Putin putting heads together
It is time for diplomatic shuttles between London and Paris; Paris and London, and Paris and Washington and Washington and between Moscow and Washington. There is a common enemy to be fought and defeated.
As diplomatic shuttles and bombings of ISIS positions in Syria progress, a Russian aircraft is downed in Turkey, with Turkey accusing Russia of violation of its air space. Turkey belongs to the North Atlantic Organization, NATO, but Russia is not.
The common enemy is ISIS with headquarters in Raqqa, Syria, making the number two enemy for the civilized world's situated in Syria. Its killing of innocent people in Paris has made its position in the world a dangerous situation, making its deadly attacks  the only news on the networks.
However, the downing of the Russian jet bomber by Turkey has changed the direction of the news analysis over the ISIS's attack of Paris and the current Brussels' lockdown. The downing of the Russian jet bomber and killing of the two pilots has been described by Vladimir Putin as a stab on the back.
Analysts' fear that the new development may renew the division between Russia and the West and that it is capable of endangering the search for cooperation between them against the ISIS. Before the ISIS turned into a total enemy that now endangers the way of life in the civilized world, some countries from the civilized world had chosen to seek out the moderate among the dangerous elements to use against their first enemy in Syria, Bashir al-Assad. Some of the dangerous elements among the ISIS had actually been armed by some in the civilized world.
Trouble came, when the ISIS turned the muzzle of the guns and the bombs against the power in Iraq, seeking to create its own country with half of Iraq and Syria. It was then that the countries from the civilized world realized the danger it had created by arming people least known to them. Now that the ISIS has declared total war against the civilized world, the strength to use against Assad - the civilized world's first target - will now be directed against ISIS, because it is impossible to pursue two rats at the same time to avoid losing both, especially when one of the rats is like a python that is capable of fighting back dangerously, as ISIS is currently doing.
The diplomacy currently being undertaken by France, Britain, the United States and Russia also appears confusing. President Vladimir Putin of Russia had mentioned what needed to be done to cripple the ISIS by telling those doing business with it to stop doing business with it. But it also appears that the time for that measure that has passed, because ISIS seems to have armed itself to the teeth in readiness for the worst. If the evil organization is incapable of surviving any form of attack from its enemies, would it have embarked on the attack on a Russian commercial aircraft and the merciless killings in Paris? The killings in Paris and the downing of the Russian aircraft has suddenly woken the civilized world from slumber.
Imagine a whole of Belgium putting Brussels in a lockdown for the fear of an attack. Is that proactive enough in a modern world? It is true that the world is filled with dangerous ideologues looking for people to kill. No one has asked questions about how the attackers may have gained access to all the places in Paris, where they killed innocent people, possibly for security lax. Were there police officers or security guards in all those places, where the terrorists carried out the attacks? This is the first question the civilized world should first ask themselves, especially Francois Hollande, whose country was attacked and innocent people killed. The same question should be put to the president of Mali.
If the civilized world doesn't or some countries in the civilized world don't develop a proactive culture of  protecting their people at home, embarking on a war expedition would only further expose the people at home to unwarranted danger. Aside from the need to ensure the protection of the home front, there is also the need for the countries, who are currently talking tough against the ISIS develop a common front without any country treated as an outsider. This is not currently the case. The question must be asked about which of the two enemies currently in Syria that needs to be taken out: Is it the ISIS or Assad? If it  is  the ISIS, the powers that the ISIS has targeted with its onslaught should cooperate to completely take out the ISIS.
If it is Assad that needs to be taken out, all the powers need to agree and work toward taking Assad out. But would Putin allow Assad to be taken out with all the support he already assured Assad? Undoubtedly, because the ISIS had attacked Russia's interest, Putin will cooperate for the ISIS to be taken out as he had voiced his concern. But the announcement by the civilized world that it would not remove the sanctions placed on Russia over the crisis in Ukraine may be unhelpful in this matter. And Putin has read the diplomatic hand writings on the wall. As he is meeting with leaders from the civilized world, he has also met with Iran. Obviously, before the ISIS set out on the attack on the civilized world and Russia at the same time, it must have consider the disunity between the West and Russia.
Remember what Christ said about a divided house: A house divided against itself cannot stand. If you have seen it happen at the family level or small communities level, where vital interests are lost, because some members only think about themselves and careless about corporate interests, you will understand the need for all these big world powers to swallow their pride and form a common front against a common enemy.