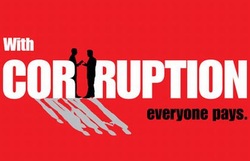 Courtesy: beijingcream.com)
Campaign for Venezuela's  14 April election between Nicolas Maduro and Henrique Capriles is in progress with corruption as a major issue of contention.
"I am going to pursue corruption where ever it is," Maduro vowed during a campaign in Caracas.
Reports say the  fight against corruption in Venezuela is not new. And that it was corruption that Hugo Chavez rode its back to power in 1998. The question is: Why is it difficult to banish corruption despite vigorous fight against it not only in Venezuela but almost in every country of the world?
Maduro is vowing to fight corruption. So also Caprile said Maduro would not last. Although, he did not say corruption would be Maduro's undoing, but that as a candidate he would end special favors for friends of party leaders who gain quick access to social benefits.
Corruption is not limited to Venezuela or other third world countries. The cankerworm is a regular player virtually in every country of the world. In New York State of the United States of America, Governor Andrew Cuomo has just promised to improve the laws to strengthen the fight against corruption, with a reference to the arrests of senator Malcolm Smith-a Queens Democratic and Assemblyman Eric Stevenson- a Bronx Democrat. The Newsday online reported, "Cuomo proposes corruption fighting plan".
Corruption is as old as the universe itself if the lines of the Christian scripture are brought into context about the fall, the curse and the struggle, and the suffering that human survival entail and the subsequent murder of Abel by Cain. If corruption is an inherent part of human nature, which easily reminds us of the philosophers coinage of asceticism and hedonism, and has led to social struggle that results in utopian and dystopian, will humanity ever conquer corruption and will the fight not continue as a ding-dong affair both good and evil tackling each other?
As developments around the world attest, some countries have been able to tame corruption to a level of accommodation beyond enormous damage to social needs of the people, while it has almost taken the breadth out of governance in some other countries like Venezuela and Nigeria.
Currently, there is a private initiative outside government's effort to fight corruption in Africa. This was revealed in an interview by Orji Kalu, a former governor in Nigeria and published in the National Mirror Newspaper online. He has been a victim of the fight against corruption in his country; he speaks about the damage corruption has done to Nigeria and the need for Nigerians to come together for a solution, before corruption will take the country to the cleaners.
Books and books upon books have been written on corruption in prose and verse; some in direct exposition and others in satire like Jonathan Swift's "Gulliver's Travel", "Thomas More "Utopia" Ray Bradbury's "Fahrenheit 451" and Geoffrey Chaucer's "The Pardoner's Prologue and Tale."
Observers believe corruption can never be exterminated and that it can only be policed to render it ineffective as done in certain countries, because it is part of human nature and that this also has featured in dramas showing humans' vulnerability to corruption.
begin htmlcommentbox.com -->
HTML Comment Box is loading comments...
NEWS AND FEATURES
News & Features Around The World