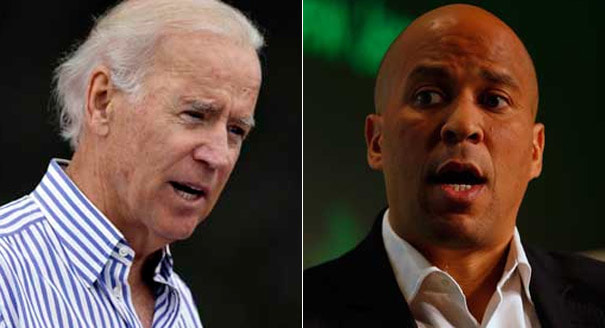 Joe Biden and Cory Booker
Not many people know Cory Booker, the United States senator from Newark in New Jersey, though he is popular. But Booker seems to have been more popular as a mayor of Newark, than as a senator - some people say.
On Wednesday, Senator Booker appeared in the news and aired by the Fox News.  He talked about why President Donald Trump should not be allowed to pick a new judge for the Supreme Court.
Booker spit moral equivalent of fire, just like some other Democrats have been doing to show their displeasure against Trump, over Trump fixer's disclosure that he made hush money payment to two women with Trump's approval.
Before Booker's latest appearance on the television screen, it was like he was light in complexion against his latest seemingly dark complexion. A couple watched him, and the wife did not recognize Booker, the husband who recognized Booker said that Booker had changed. He wondered whether Booker had embarked on sabbatical and returned ready to pursue his presidential ambition, which information had made its round that he might likely be the next Democratic wonder guy to pursue the presidency.
The couple who watch Booker spitting moral equivalent of fire in a televised news report debated with the husband saying that if Booker is the Democrat's plan for next presidential election, Booker will need to undertake how to talk sweet, embrace sweet talk and become a wordsmith if not a complete orator, to be able convince the electorate and make them believe the unbelievable, like Barack Obama did at his own emergence, and Trump did and leveled the entire population of American star power in an election the star powers invested their star powers against Trump, but Trump still became president.
"Change has come to America", President Obama announced to a tumultuous crowd in Chicago on the night of his election victory. Two years later, Americans are still debating whether change has indeed come or not to America, amid another rhetoric to making America great again by Trump. Some people are saying that what Obama meant on the night of his election was that even though he was not sure whether change will come or not come to America, he knew what the people wanted to hear. Put it the change has come statement against most of his earlier statements, you will realize that what matter most is making statements that will connect and endear you to Americans. And you may not mean what you are saying as part of politics.
Booker must know that you don't become president by just talking tough. You have to first be able to deliver a statement to introduce yourself to the entire American population beyond the senatorial district. Aside from announcing yourself to the American people, you must be rest assured you have what it takes to demolish the aspiration of other contestants the way Trump did, considering America's vastness and the possibility of better candidates springing from least expected areas to drown your own aspiration. You don't wait and rely on you becoming your party's candidate for being a tough guy.
When people talk of Joseph Biden or Cory Booker as the Democratic Party's likely choice for the next presidential election, there is always the wait and see attitude, because there is a firm belief that new men and women may spring to challenge and take the crown away from candidates who have not mastered the way to talk and make people listen with rapt attention, and make listeners stick to them like the crazy glue.
Widget is loading comments...
NEWS AND FEATURES
News & Features Around The World