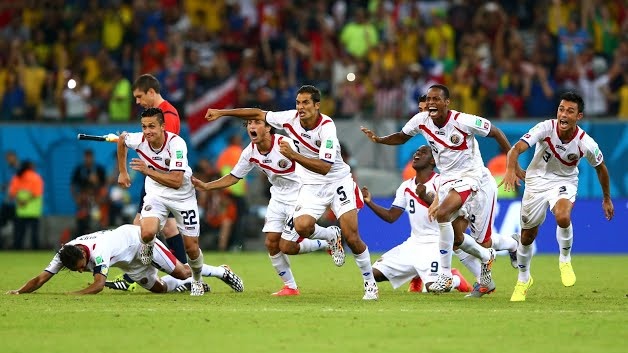 Joy after hard work for the Costa Ricans
Costa Ricans are in the feat of celebration for a victory earned in a hard fight against Greece on Sunday, through penalty shoot outs, after 120 minutes of play that ended 1-1.
Theofanis Gekas of Greece, wearing No 20 jersey, lost his penalty and ended the journey for the Greece team with a loss of 4-3.
Costa Ricans scored their first goal in the 52nd minute through Brian Ruiz. The goal energized Greece players.
After pressure upon pressure through the left flank, Sokratis in No 19 jersey kicked the ball into the net for his side first goal.
The irony of the victory for Costa Rica is that Greece scores its equalizer in the stop period of the game after full 90 minutes of play.
It was a tough match for the Costa Rican players their stamina compared to that of the Greece players, who seemed bigger and full of strength.
The No 9 and 10 players on the side of Costa Ricans seemed to have been marked out. The player in the 9 jersey was specifically taken out, but he continued using whatever space he had available.
Greece had possession of ball most of the time. Suddenly, the Costa Rican got the ball, passed it around three players, and then an opening with little or no effort, Ruiz just tipped the ball into the left corner of the net. Greece had the ball and mounted sustained pressure on Costa Ricans, but the finishing was their biggest problem.
The game became physical; with rough tackles from both sides and the referee resorted to issuing of yellow cards. One of the Costa Rican players - Oscar Duarte - was given the Red card in the 66 minute of the game, reducing the Costa Ricans to 10 players against Greece's 11. The Greece team relentlessly mounted pressure until they succeeded two minutes into extra time after the full 90 minutes.
Greece had the ball most of the time. knowing what to do with the ball was another issue that was beyond the players. Unlike the Costa Rican whose occasional breaks was dangerous and explained why the Greece defense refused to allow them the freedom to rove freely. this report will be uncompleted without mention of costa Rica's goalkeeper's role. Apart from saving a penalty shot by Gekas, the keepers was a saving grace for his team. He foiled most of the finishing by Greece. There was a goal bound ball he stopped at the top of the post that resulted into injury for him. His safe goal keeping defeated Greece.
NEWS AND FEATURES
News & Features Around The World