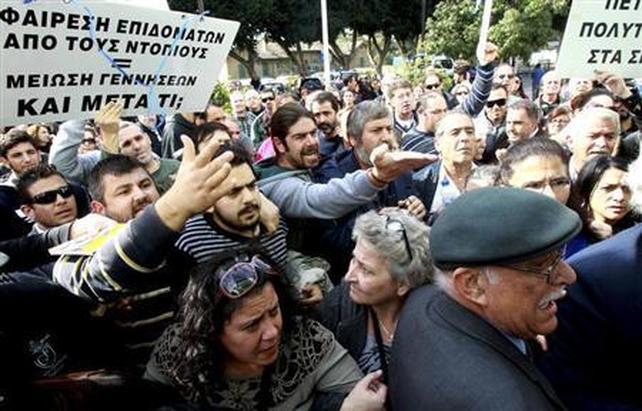 Cypriots are angry. The country's banks have been under  lock to forestal mass withdrawal. The result of economic insolvency in yet another European country.
Reports by the BBC say that the waiting game towards a solution to the country's financial crisis is tottering to an end amid uncertainty, as voting by members of representatives on the situation is awaited.
Latest reports from the country say a vote has been postponed amid likely protests.
What do you see in the photograph above, men and women confronting the police, sorrow written all over their faces. Can you imagine how people will feel not having access to their hard earned income? Some people say it is worse than a life in the cold to suddenly find oneself unable to get money from the bank. However, they say a lesson has been learnt from the Euro zone's experience. Yesterday, it was Greece, Spain and Portugal. Today, it is Cyprus. Observers point to a need for countries to be circumspect in financial handling to avoid unwholesome type of financial situation some European countries find themselves.
The European countries aren't alone as the United States is currently struggling with its own finance that has caused what is now popularly referred as sequestration or forceful spending cuts. Some observers say it is a lesson for the need to learn how to balance budgets and not spend what you don't have.
What is the benefit of having been financially stable yesterday, but suddenly discover you are in a financially hot water you don't want the following day? No person wants to be financially down. People easily bare witness that poverty or lack of money to meet immediate demands is akin to sickness. They say the need to have money to meet immediate needs knows no age barrier and it is why people work; migrate in search of work to avoid poverty and look forward to years of retirement in comfort.
The story of what has been happening to some countries in Europe will easily remind people of stories that have been told about how people commit suicide in times of bad economic depression.
NEWS AND FEATURES
News & Features Around The World