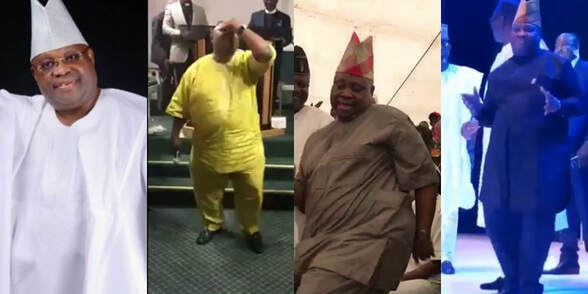 Isiaka Adeleke in one of his dancing moments
Many Nigerians are in a state of unbelief over an election tribunal's decision to return a governorship victory to the owner, but with fears that the ruling party may still reclaim the victory through control of the courts.
Would the power in Nigeria allow governor-elect of Osun State, Isiaka Adeleke to show his mastery of the dancing steps with body and shoulders moving side ways?
​   Recently, Adeleke became a governor elect and Nigerians saw how good he could dance in places where he showed his dancing steps during the election campaigns.
But the governorship victory was taken away from him in what the country's  Independent Electoral Commission declared an inconclusive election and a hushed rerun was ordered, and enabled the ruling party exercise of power and  and took back the governorship victory from Adeleke in a rerun election people described as nothing better than brigandage!
Many people said there was nothing wrong with a rerun, but said what type of a rerun was the one they witnessed that the hand of a popular candidate is held together for the ruling party's candidate to trounce him?
People said that was not a rerun but brigandage. They said Adeleke lost to the ruling party's candidate, because the ruling party wanted the victory at all cost. However, Adeleke went to the election tribunal with the complaint about how he was robbed in the election rerun.
Now that the election tribunal has restored Adeleke's victory, people are saying that Adeleke will dance because they say they know Adeleke can dance. Moreover, they say, Adeleke not only know how to dance, but that the popular Nigerian musician named David Davido is Adeleke's nephew and that Davido will play the music and that Adeleke will dance.
As people are debating Adeleke's dexterity in dancing and expecting to see him dance when he will be sworn into office, the ruling party has given notice of appeal against the tribunal's ruling that gave the governor's seat back to Adeleke.
The ruling party's secretary said that the tribunal's ruling will not stand before a superior court; the governor of Osun State who has benefited from the brigandage rerun has said the election tribunal's decision has already gone on appeal and the chairman of the ruling party has reiterated the same statement.
People are asking whether these people will allow Adeleke to dance. The question is predicated on the knowledge that the Federal Government is believed to control the Court in the country. Even if the truth is contrary to people's believe that the government controls the Appeal Court and that the Appeal Court will return the governorship victory back to the ruling party candidate, the practical experience where an Appeal Court judge has a corruption case to answer and he is still allowed to adjudicate cases of alleged corrupt people, while he is a free man does not help matters.
Meanwhile, people have not forgotten how the president of the country has unilaterally removed the Chief Justice of the federation on the ground of allegation of corruption. Because of the fear of the power of the ruling party over the courts and that the ruling party chieftains chest-thumping claim that they will take back the loot that the election tribunal has dispossessed their party does not make the people to be certain they will be allowed to see more of Adeleke's dancing steps.
But they are saying if the courts are allowed to be free and the case goes to the Appeal Court, Davido will play and Adeleke will dance. Because they say they believe that Nigerians have seen brigandage in display and at its worst during the Osun State rerun election.
Widget is loading comments...
NEWS AND FEATURES
News & Features Around The World