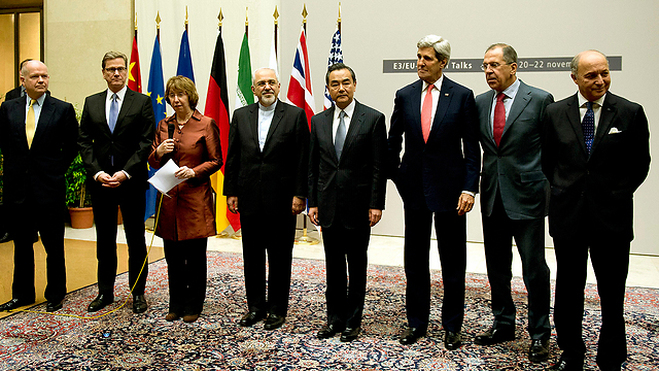 Leaders at the Historic meeting in Geneva between western powers and Iran
The current state of affairs between the western powers and Iran over the latter's agreement to slow down its pace toward acquisition of nuclear power is reminiscence of a common euphemism 'Dining with the devil with a long spoon,' when dealing with unavoidable enemy.
It is the way the world views the relationship between the western powers and Iran, and it is why people are awed at the sealing of an agreement between the powers and the Iranian government, despite the level of distrust between them. The only difference is that no one can say which of the two is the saint or the devil. Some already possess the nuke, the other is seeking the same.
"It is a historical mistake," Benjamin Netanyahu of Israel describes the agreement signed with iran. He believes that Tehran should not be trusted. But President Barack Obama leading the western powers assures Netanyahu that America and ally have Israel's back and says Iran's disposition at every step of the agreement will determine the extent of the agreement's execution.
The agreement signed in Geneva last weekend will lead to the lifting of certain economic sanctions that have been placed on Iran over its earlier decisions to call western powers' bluff over its decision for acquisition of nuclear power for peaceful purposes. But the western powers distrust Iran, believing that Iran's original aim is to acquire nuclear power for bomb making. Iran under Ahmed Ahmedinajedi has argued that if Israel and all the western powers have nuclear power, why must they stand stand between iran and acquisition of the same?
Western powers believe that Iran's nuclear capability will be a threat to Israel and it will not condone Iran acquiring nuclear capability that will lead to acquisition of the bomb.
A man interviewed for this report said he believes that anything is possible, despite Ayatollah Khameini's hard disposition toward the deliberations between the western powers and iran before the historic agreement. "People can change position on issues. It is possible both sides are playing diplomacy."
Ultimately, Iran will be the first beneficiary of the agreement. It will have biting sanctions that have affected its economy and the social situation in the country lifted. Iranians will continue the enjoyment of the new lease of life depending on Tehran's satisfactory behavior. The new Iranian president who has chosen to take his country toward a new alignment with the west will have to work to continually get the support of the country's supreme leader.
Observers are saying that it is possible that the sanctions on Iran are achieving desirable effect. This, they say, may be responsible for Iran's new president's readiness to dine with the west, and the supreme leader may have no choice than agree with an only option open to him,  pour vitriolic on Israel as the cause of his country's delicate diplomatic position.
Comment Form is loading comments...
NEWS AND FEATURES
News & Features Around The World