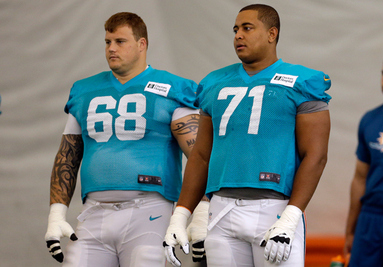 Incognito and Martin (Courtesy: nfl.si.com)
The Miami Dolphin’s bullying crisis is getting clearer by the day with news that Richie Incognito – the linesman accused of bullying Jonathan Martin, a 24 years old rookie – is down, while the victim of the bullying is on his feet but his future still uncertain. While Incognito's interview with Fox News has made it clear that vulgarism is a culture in Dolphins' locker room with obvious effort to strike out bullying from the context.
“I’m embarrassed by my actions,” Incognito said. “But what I want people to know is, the way Jonathan and the rest of the offensive line and how our teammates, how we communicate, it’s vulgar.” he said in an interview published in the New York Times. Incognito said what happened between him and Martin was not bullying, racism or anything inhuman.
Although, it is not clear if Martin will make it back to the Dolphins, but information from a survey has revealed that many among his team mates acknowledge bullying in Dolphins’ locker room, and the percentage of those who  would prefer to be Martin’s team mate against playing with Incognito are higher.
Incognito is already on suspension following the revelation that he has been bullying Martin, while Martin has left the team to California. The fear observers over the development in Dolphins has been whether Martin will be able to play with the same team or any other team for that matter, being the arrowhead in the bursting of the culture in the Dolphins’ locker room. It is the culture of vulgarism that Incognito tries to conceal by saying the acts between him and martin is no bullying but the way they communicate in the locker room.
Some people have said that strengthening players to be tough is a culture that pervades the National Football League, NFL, – that employ the players. And that for one to be the one that makes the leak could be sinister to future engagement, since players already who are already attuned to the culture will not be friendly to the whistleblower or want to have anything to do with him, even if the NFL continues to engage him, because he is a victim who should not be punished. Moreover, some have said that Martin's team mates have said Incognito is no bully.
Observers who have sympathy for Martin are relieved by the outcome of the survey, which shows that Martin will not be ostracized by his team mates if he the NFL's investigation gives him a clean bill to return to Dolphins.
It is Incognito who has been vilified, suspended and who is struggling to douse a fire and culture that should not exist in any human community. A report by the New York Post describes him as NFL’s Incredible Hulk, a rampaging behemoth whose history of violence was born in childhood and nurtured through his life, against what some have said that Incognito may have been a victim of operation and his role based on the culture in the locker room.
The Dolphins’ coach, Joe Philbin, has said that his knowledge of the locker room should be like a university campus, where every child should feel at home in an environment of learning, without fear or threat from anyone. His seeming lack of knowledge of the vulgar attitude among his players has made many in the media say that he should be held responsible for the Dolphins' locker room incidence.
Incognito was said to have sent messages to Martin that included a voice mail in which he used slurs; threats of physical violence and said, “I ‘ll kill you.” Martin representative reportedly turned the evidence among others to the NFL. It is believed that both Incognito and Martin’s future will depend on the outcome of the NFL's ongoing investigations. However, Incognito's revelation that Martin also sent a vulgar message to him a week before the revelation he has become a bullying victim is an indication that both men and their coach requires further scrutiny.