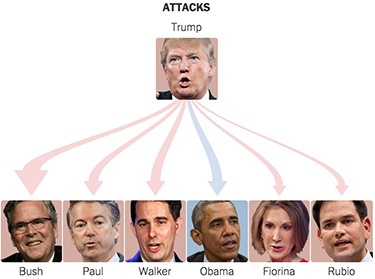 Donald Trump remains the front runner and ahead of his opponents, despite thoughts that he could turn or become a flip-flopper. He remains the same that he has been all along: the brawler.
If he has been able to get ahead in the polls by brawling, and he has been gaining more number in followers than each of his opponents, why would people him to changed? Do you change a winning strategy?
Consistency is what people like to see in politicians against flip-flops, just like sports lovers love a winning team. Today, Trump is winning for brawling, we cannot talk about what could happen tomorrow.
Perhaps, his being a rich guy may be a-plus to his brawling, because if you are nobody and you brawl, no one will listen. It is why success counts in human endeavors. And Trump has never hidden his success, and that he has got the brain to move things around and make things happen.
He knows the opponents' weaknesses. He knows who among his opponents is a threat to his current position. It was why he went after Rand Paul in the last debate. He mentioned what he knew could unsettle Jeb Bush that his senior brother gave Obama the chance of becoming the president.
Jeb Bush said that his elder brother's policy has kept Americans safe. Is it a surprise that Trump is ahead of Bush in the polls? Why do you think he is ahead of Bush in the polls? Answers to these questions would show what Americans think about George Bush and his presidency and how it is affecting Jeb's ambition.
Meanwhile, Trump's opponents are playing the catch up game. The New York Times' picture says it all - Trump is at the top and his opponents are below. The brawling is working. By the way, is the brawling theory not essentially American? Is it not about speaking out? Is it not about being your natural-self and not allowing people to gag you? Is it not about freedom of expression and rejecting imposition that is against the nature of freedom?
The American is not about being passive. Brawl, brawl and brawl if it is getting you where you are going. Be gentle as the Dove it it is getting you where you are going. Like the Late Fela Anikulapo Kuti of blessed memory, "Don't follow, follow." Be the leader. Trump is brawling and he is leading. Everyone, including the media, seems to be following him now.
NEWS AND FEATURES
News & Features Around The World