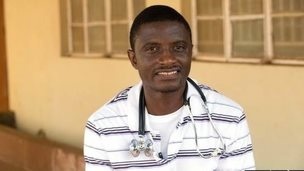 Martin Salia (bbc)
A Sierra Leone doctor, Martin Salia, treated for Ebola in a Nebarska hospital in the United States  has died, the hospital said in a statement. Martin arrived in the United States on Saturday critically ill of Ebola's symptoms.
Martin followed the same path like Eric Duncan, who arrived from Monrovia and died in a Dallas hospital in October. It is the second death on record from Ebola in the U.S.
The Nebraska hospital said that Martin died due the advanced stage of the symptoms, when he arrived from Sierra Leone.
Martin had worked as a general surgeon at Kissy United Methodist Hospital in Freetown. He was a resident of the U.S by marriage to an American, Isatu Salia.
His wife, Isatu, expressed appreciation to the hospital who treated her husband.
Just as Ebola had killed two men who had rushed to the U.S in search of treatment, like the case of Sawyer who rushed to Nigeria but died, there had been an Ebola successful treatment in the U.S.
Notable among them was Dr. Spenser who was admitted at Bellevue Hospital in New York after arrived from Monrovia in Guinea, where he had worked caring for ebola patients with Doctors without Borders. His hospitalization and eventual cure made headlines.
NEWS AND FEATURES
News & Features Around The World