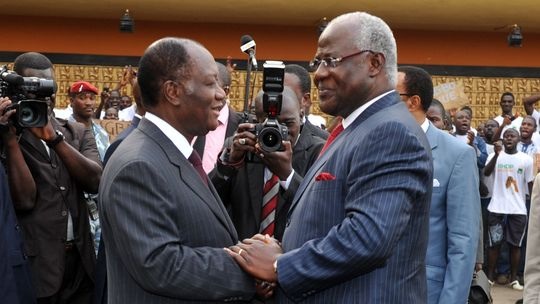 The Ivory Coast National soccer team risks disqualification from the 2015 Africa Nations' cup if it continues with cold feet over Ebola and disallows its match with Sierra Leone in Abidjan next week.
The  Ivory Coast team will love to compete for its slot in the nations' cup qualifying match against Sierra Leone, but  certainly not to compete with Ebola, a dreadful disease causing health scare in Sierra Leone and some other West African countries.
According to the BBC, the government in Abidjan is thinking twice about allowing Sierra Leone's team visit to Abidjan for the match scheduled for September 6. Consequently, a spokesman for Confederation of African Football hinted that if a country forfeits one qualifying match, it risks disqualification from the championship.
Observers say it is shocking that the Ivory Coast's dilemma is about allowing Sierra Leone to come to Abidjan and not about them going to Sierra Leone. CAF insists that the match be played as scheduled, and Sierra Leone arranges to feature a squad consisting players from outside Sierra Leone, to  limit Ivory Coast's fear about Sierra Leone bringing the deadly virus into Abidjan.
NEWS AND FEATURES
News & Features Around The World