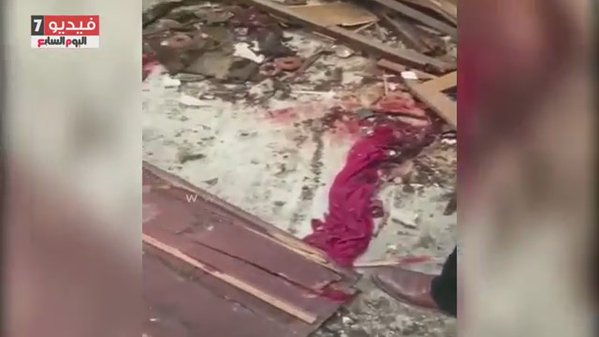 Human blood flow in the Egyptian Church (Courtesy:Al Jazeera)
"I found bodies, many of them women, lying on the pews. It was a horrible scene," cathedral worker Attiya Mahrous, who rushed to the chapel after he heard the blast, told AP.    His clothes and hands were stained with blood and his hair matted with dust, Al Jazeera reported.
The news from Egypt is about the loss of 25 lives to terror attack in a Church early on Sunday, when a bomb taken into or lobbed into the Church by terrorists, exploded in Cairo.
The affected Church is reported to be close to the main Coptic Christian Church and near the home of Pope Tawadros 11, the Church leader.
The Egyptian presidency has reportedly declared national mourning after the attack. This is much unlike the aftermath of the killings Nigeria, where terrorists killing of 56 people few days went almost unnoticed by the presidency in Abuja. Can this be the result of almost daily killing by Boko Haram terrorists and the government in Abuja no longer pay attention?
For declaring a day of national mourning so soon after the killing on Sunday, observers see the Egyptian government's reaction as saying that the government cares about the lives of the people killed. ​
Apparently, people note that the abberation commited by terrorists in Cairo by attacking people in a house of worship has been common occurence in Nigeria, where boko Haram terrorists have killed people in churches and Schools with no qualms.
It is nothed that terrorists killings in Egypt is also not new, having started since the coup that ousted Muhammed Morsi and enthroned President El Sisi. But in spite of the consistent terror killings in Egypt as in Nigeria, it is gratifying to see the the government in Cairo living up to expectations and that it is aware of occurrences in its jursdiction.
NEWS AND FEATURES
News & Features Around The World