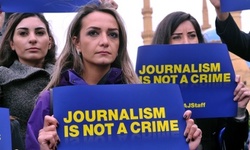 Protesting incarceration of colleagues
An Egyptian court has Egypt has jailed three Al-Jazeera journalists accused of bias reporting, despite public outcry and global protest by journalists, against Egyptian authorities' declaration of war on the media. Each of the journalists have reportedly been sentenced to spend 7 and 10 years in jail.
Latest reports say that the journalists, Peter Greste, Muhammed Fahmy and Baher Muhamed have been jailed for conspiring with the Muslim Brotherhood to publish false information against the military backed interim government. Greste and Fahmy bag seven years each, while Muhamed bags 10 years. CNN reports that several other journalists from the same network tried in absentia bag 10 years each.
The sentencing of the journalists comes after the news of confirmation of death sentences on over 800 Egyptians for protesting the sacking of Muhammed Morsi.
NEWS AND FEATURES
News & Features Around The World