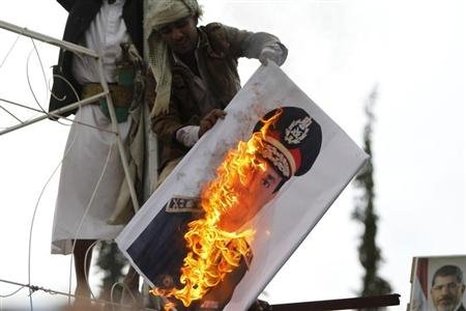 A protester burning Genral El Sisi's photo Courtesy: Mohamed Al Sayaghi/Reuters
It happened suddenly, though the momentum for  Mohamed Morsi sack from office by his foes had built  from day one of his election. People say it is because of his membership of the Muslim Brotherhood. They say what his foes were powerless of immediately was stop his election. They were shocked by his election and wanted to see which direction his government would go. Would it be against their wishes and in support of his group’s interest or against his group’s interest in support of their own interest? Obviously one of the charges against him was that he had chosen to toe his group’s interest, as if it was a new development for a party that won an election to rule based on its program. Morsi’s foes attempt a new meaning to inclusiveness and forget that this does not mean total abdication of power by the ruling party. The world is grappling with a new experience; people are asking questions without intelligible answers and people are numbed as to why Morsi’s abduction has become a new normal.
The Egypt’s experience has proved different from universal application, Morsi’s foes think the group he belongs may consolidate power and becomes another dictatorship. It is why a mere protest against the government turns into a fiasco as in Ernest Hemmingway’s description of a failure. From all indications, the protest that Morsi’s enemies seized upon to grab power in Egypt was a failure. The protest helped killed a legitimate government and helped toward illegitimacy institutionalization. It is why the Egypt’s unrest remains, while the ones in Turkey and Brazil have died. There was no much difference in the protest in Turkey, Brazil and Egypt, other than the evil machination of Egypt military’s insubordination against the legitimate authority, a trend that was absent in Turkey and Brazil. A protest in Bulgaria running 40th days has not witnessed the army sacking the government.
Leaders in Turkey and Brazil have opportunity to look at protesters agitation and work toward embracing protesters’ demands, while Morsi has been denied same opportunity.
People all over the world have been asking why had Egypt’s military staged a coup and called it another name unavailable in political lexicons.
People are asking the reason why countries that are citadels of democracy turn their eyes to the evil perpetrated against democracy in Egypt. Some are saying that the civilized world, as the citadels of democracy like to be called, cannot claim innocence in the Egyptian military butchering of democracy. People say it is why they are quiet about it, allowing the military to hand pick leaders and allowing an absurd development to flower in the place of democracy. Rather than tasking the Egyptian military leaders for the butchery, they say event in the country was not a coup but enablement of peoples’ wish. They say the event will not stop their aid to the country’s military, and praises the hand picked leaders for their urgent plan to return the country to elective governance.
The military has further been aided to kill over 50 people, because according to it, it wanted to keep terrorists away from the barrack, where it is holding Morsi. Now, according to the BBC, the military is planning a protest of its own for Egyptians to accepts its failure.
No, Morsi’s abduction is normal to democracy’s policemen in the West. What they want is his quick release from house arrest, and for the Muslim Brotherhood to be included in the hand picking of new leaders. People say the world’s democracy policemen don’t like Egypt, because Egypt lacks oil wealth. Therefore, they say whatever form of government instituted in the country is of no interest to them. Else, the policemen would have pulled the aid to the Egypt’s military to protest the sacking of a duly elected president and the government. People say the reason for the aid to Egypt’s military is not for the love of Egypt or Egyptians, but to use the country’s military to police the Middle East, toward ensuring the peace that has been elusive there.
The rumpus caused by the Egypt’s military by Morsi’s sack is unsettling and festering. Egypt’s streets have turned into a death zone, brothers and sisters in scuffle, because of a military’s insubordination. And the world is merely a spectator to the dangerous trend, because those who have power to call Egypt’s military to order are acting like partakers in Egypt’s nascent democracy’s death.