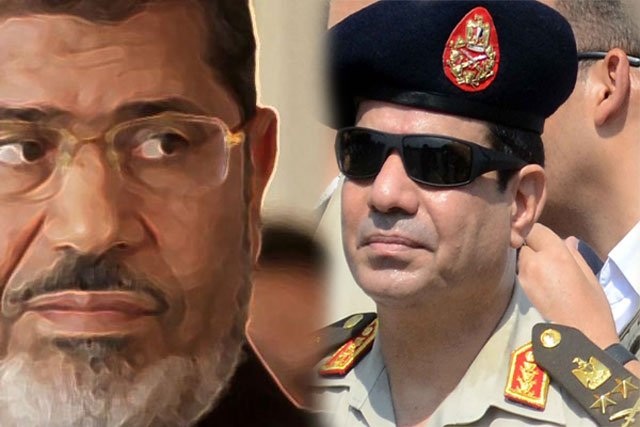 El-Sisi and the man he supplanted (Courtesy: www.newstribe.com)
﻿    Field Marshal Fattah El-Sisi is Egypt's president elect. He emerged winner of the election he was the only candidate, safe a challenger who knew he was no challenger, but a smokescreen to bamboozle the world.
The voting ran for three days and prolonged on every other day in search of voters with which to give El-Sisi a legitimate mandate.
He still has a mandate anyway winning about 93 percent of the vote of the few people who stepped out to vote. The apparent scenario was that there were not just enough people to vote to give the former General a legitimate mandate, because people had been scared away.
Never can say that voting may lead to life or death sentence to which El-Sisi has turned Egypt for the realization of  a presidential ambition.
El-Sisi has told Egyptians and the world that he is a blessing to the land of the Pharaohs, but he has turned out to be the opposite. He has turned the jail house to reporters' home. The number of reporters in his jail now numbers five for doing nothing other than report the evil, which El-Sisi has chosen to make Egypt for his selfish needs and the same reason he has vowed to decimate the population of the Muslim Brotherhood. Members  of the brotherhood who are not in jail or been sentenced to death are on the run or in hiding. The world watched and witnessed how more than a thousand people were shot to untimely death, because Egypt's most power asshole wanted Muhammed Morsi and the Muslim Brotherhood out of the way.
Paradoxically, he shot himself  without knowing it with the senseless crackdown he ordered against unwary people for his intentions. After ordering death to freedom and liberty, the crackdown and mass killings and senseless outbursts came back and haunted his search for legitimate election. People refused to step out of their homes. News reports said there were no voters in the polling stations, safe Sisi's supporters. The result is that only 46 percent of voters are recorded, far less than above 50 percent in Morsi's election. Some people are suggesting that since Morsi enjoys more support than him in the land, he should shamelessly bring Morsi out of jail, and let the guy continue with the genuine mandate he has from the people. ﻿
Egypt will not be the first country the world has witnessed a sham election and a leader unelected supposedly steps out to claim victory, leading the country to ruins and the minority having their way against a silenced majority. Egypt too has witnessed some of it in the past and how it manages to come into it again is befuddling. If Egypt has not been in a parlous state, El-Sisi would not have gotten a window of opportunity to transform from uniform into civilian leadership. It is part of the curse  on the African continent. Look at the map of Africa from Egypt to Sudan, Uganda, Central African Republic and Congo Democratic Republic and Rwanda and Zimbabwe. And where there is relative hope of promising journey, the Al-Shabaab, Boko Haram and others around Mali are threatening the land.
And of course, Egypt has its own militants that have promised to turn the country's day into night, if El-Sisi continues with his manipulations. But who will stop him? The guy and his supporters are already out beating the drums for success in seizing power. They are careless whether it is legitimate or illegitimate. What matters to them is that it is their turn to enjoy the loot.
Click to set custom HTML
Widget is loading comments...
NEWS AND FEATURES
News & Features Around The World