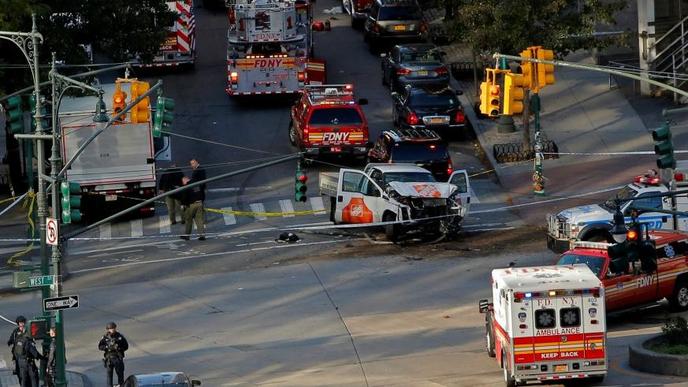 The scene at Downtown Manhattan on Tuesday.
Eight people were killed in Downtown Manhattan, New York, on Tuesday, when a truck was rammed on pedestrians in a bike lane.
Two people were reported as occupants of the truck. It is unclear who among the two is the driver, other than one of the occupants, a man from Uzbekistan came out and shouted "God is great."
A lady came into a building with the signs of a Cat on her cheeks and said that there were about 9 gun shots around the corner in the neighborhood, and that she feared for her life.
News reports revealed a little later that six people were killed. A woman waiting to go to work was asked about what she might have seen happening on the streets.
She said that there were lots of police officers and paramedics, characteristics of a crime scenes.
Reliable information peddled around the neighborhood says that one man driving a pick up believed to have been rented reportedly drove into pedestrians on a bike lane between Warren Street and Murray Street, and plowed into a yellow colored special education bus on Murray and West Street intersection, before the driver jumped out and began shooting with a fake gun. He was said to been shot by the police as a result. .
News reports described the driver of the pick up, who drove on the bike lane against regulations as an immigrant from Uzbekistan, and that he was heard shouting "God is great," showing an alliance with the dreaded ISIS. The inference here is that it may have been a terror attack, and that the terror formulae of using the truck to plow into pedestrians has gained traction.
The number of the dead reportedly jumped to eight based on later reports. It was a shock for most people in the neighborhood that what they mostly see in news reports on the television happening and playing out in other neighborhoods has occurred right before their own eyes. No one ever believes that such a thing will happen in own neighborhood, until it is seen happening.
Before the reports about the driver and the shooter emerged, discussion centered on gun culture and the society living with and managing shootouts with victims. It is being discussed among members of the public that the eight victims of Tuesday's shoutouts in Downtown Manhattan, the dead and those who may have been rushed to the hospital, might not have known what awaited them when they stepped out of their homes for the day's journey on the streets.
Of course, with the scene in Downtown Manhattan and the believe of a terror attack, the fear of losing precious lives, beefing of security around Manhattan, are sure to negatively cause a setback for the Halloween night's reverie, as no one wants to go out there and not return home.