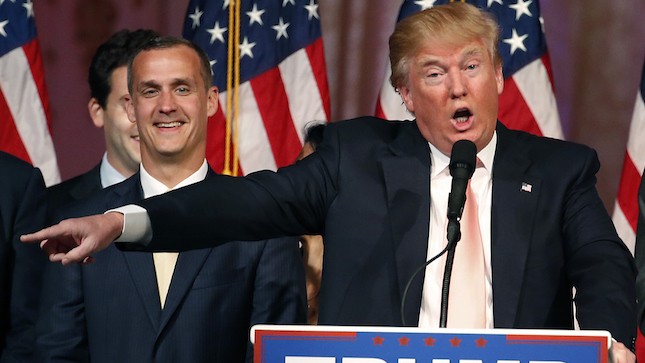 Lewandowski and Trump before the former was relieved of his post (Courtesy: Getty Images)
It is not for nothing that the New York Times is called the gray lady. It has the enterprising aspect of journalism, which other news outlets are working hard to match.
Imagine the breaking news about Donald Trump sacking of his campaign manager, Corey Lewandowski. The sacked Manager  said he had not been infomed about the reason for his removal.
Members of one family in New Jersey picked the information about the sacking of Lewandowski from the Fox News before noon, but the Fox News' anchor said the news originally reported by the New York Times awaited verification by the Fox News.
The question therefore is how did the New York Times beat the Fox news to reporting the news first? It is the question by a curious observer, who knows that Fox News is a Conservative news outlet and that it should have at least have access to information emanating from Conservative politicians ahead of New York Times, known to be a major liberal news outlet.
But people who know New York Times say that the grey old lady is known more for enterprising news reporting, ahead of its liberal credentials. Some people say it is about experience and that talking about experience, the New York Times is ahead of other competitors. And before you know it, the news about Lewandowski sack has become real on the television screens as the a major news report of the day
Why did trump sack him? Does not the sack show a campaign organization that is falling apart? Does not it show Trump's lack of management of a political campaign organization? Some people are saying that this is not the time for Trump to sack anyone, and that with his tough journey with more opposition from members of his party, he needs more of the people who have helped him to go so far on a terrain in which he is a stranger.
Lewandowski told the media that he has been informed by the Trump Campaign Organization the reason he was relieved of his post. The question to Lewandowski came amid efforts by the news media to see if there has been a rift between Trump and Lewandowski. But the Times reported that allowing Lewandowski to go may have been a way to allow the Trump campaign to forge a new front, for the tough political battle ahead of the Republican Party's presumptive nominee.
Some curious observers say that letting Lewandowski go may have been at the prompt of members of the Republican Party, whom  Trump is working to unify the party ahead of the party's convention. They say that if in the effort to ensure a convention devoid of crisis, and members of the party demand Lewandowski's removal as part of their condition to work with Trump, Trump may not have a choice. They say Trump is pragmatic, and that the only thing that does not change about him is him and that any other is capable of change.
They cite Trump's announced meeting with the National Riffle Association to discuss his support to deny gun sales to people, whose names are on the terror watch list as a good example, because they say Trump's stance in that part of the gun debate does not support the Republican Party's position. Another view says that Trump is known for firing people on the "Apprentice", and that whoever will work with Trump will have to consider the possibility of getting fired along the line.
Consequently, there are people saying that if Trump wins the presidential election, the culture of firing people, who are not ready to work, and who think it is part of freedom to earn a check without working for it, may resurface. Many people actually think that the country needs to reinvent the firing culture. But they say when you fire a staff, there must be a reason for the firing, and that keeping mum on the reason for firing a staff will only give room to all sorts of make up that lack substance in the public space and litigation in court rooms.
NEWS AND FEATURES
News & Features Around The World