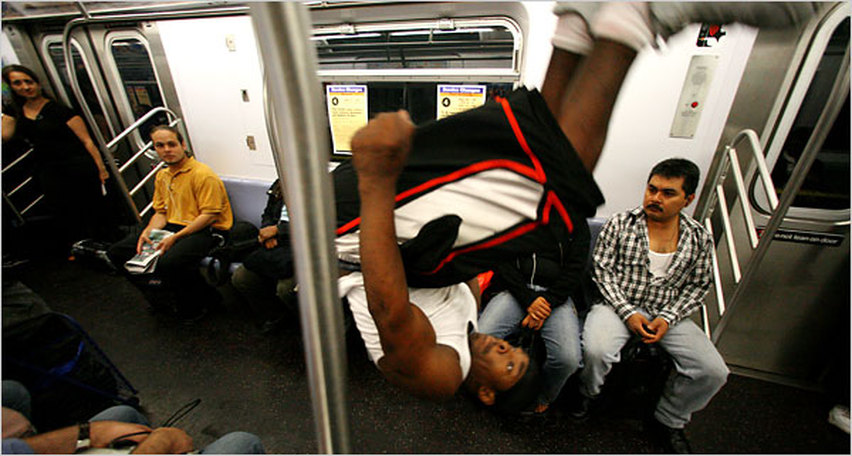 They are New Yorkers; sometimes young, strong and pack lots of energy. When they stroll into a subway car, people seeing them for the first time raise eyebrows and wonder if nothing is amiss. But after listening to one of the young men announcing their mission, everyone pays attention realizing the men pose no danger; that they are out to entertain and make people happy.

“We are students and have come out to entertain, because we don’t want to fall into bad company and into trouble,” the young and dark complexioned of the lot had announced, while his partners worked on two juke boxes they used sound production.

Soon, music takes over the subway, the men position themselves allowing one to perform, while others wait for their turn. It is an acrobatic dance in a space that spectators think as too tight for the young man’s expose. He runs across the space narrowly missing passengers’ feet and the poles that lines the center of the car. He is dancing, swinging his entire body to match the beat from the juke box. He catches a pole, swings upward, his legs hanging and the head down.

He completes a round of two minutes before another guy takes over from him. This second dancer demonstrates a style different from the first guy’s brand, but also dazzles. The passengers have been worked into a frenzy mood and want more, but the dancers are done. It is time for the passengers to give voluntary donation. The dancers stroll through the car pointing each pointing a hat toward the passengers.

A scene like this is common in New York City’s subway cars. If passengers are not being entertained by dancers, there will be young boys of high school age coming into the cars with candy boxes to sell those straphangers. There is no adult who hears young men explaining the reason they choose to occupy their time doing something not only profound but as well productive, and would not want to give a hand of support.

Observers say both the dancers and the candy sellers attract kind patronages, because they have chosen to engage in civil exercise than engage in activities that will threaten their lives and their peers or create problems for parents and the society. Although, the Metropolitan Transport Authority doesn’t approve donations on the train. Giving is voluntary, like in the case of women who are seeing each coming into the train carrying a little child in arm and seeking for help.

Also, there are the train station entertainers who play real music with crowd watching them at the various train stations around and across the city. Spectators don’t pay to watch them, but everyone is free to donate into a box on the ground in front of the often times solo-entertainer or just walk away after enjoying the music. All these entertainers make life a jolly go around affair, easing the pain of everyday work.

Most of these entertainers have jobs, but choose to play for extra income to make ends meet, since one source of income is never enough to live in New York.