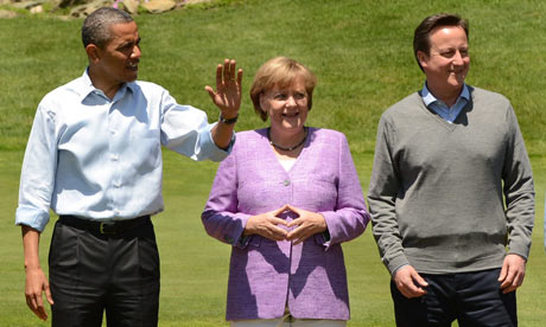 Obama, Merkel and Cameron
The lifting of restriction on citizens of Romania and Bulgaria by the European Union, EU, January1, 2014 has opened a pandora box of controversy.
From the United Kingdom to Germany, France and other frontline EU countries, there is a debate about whether to allow citizens from the two European countries access to benefit programs, while the migrants' benefit to their new homes is not in doubt.
In the UK, the prime minister, David Cameron, said in an interview with the BBC that something has to be done to stop the benefit migration. He said that over a million people coming into the country was massive. He admitted that there is a benefit to the country from the migration of skilled workers into the country, but frowned against people coming for the sole purpose of gaining on benefit programs.
Unlike David Cameron, Angela Merkel has asked her counsellor to table the issue for review amid press reports of her silence and a ploy to defuse what has become a major political issue.
In Germany, the debate about keeping the country's benefit programs from new Romanian and Bulgarian migrants entering the labor market see some people mauling a suggestion of three months ban on welfare payment for migrants. Spigel reports that a member of the same party with Merkel, Armin Laschet of North Rhine-Westphalia told public broadcaster WDR 5 that such ideas of denying migrants their rights don't fit Europe. The foreign minister and an SPD member said that freedom of movement is an essential part of European Union integration and to question it damages Germany.
Some people in Germany are saying those who commit fraud will not be permitted. Observers have responded that no country will naturally allow people who have committed fraud come into their country during immigration processing. They add that if the law allows migrants to come in legally, it will be injustice to deny them the benefit they are eligible based on the whims of those who think their countries can benefit from migrants skills, but would want to deny same migrants benefits they are entitled.
Migrants from Romania and Bulgaria, many of who are already in European countries like Italy and Spain, where the economy has not been favorable have seized on the opportunity of the lifting of restriction on them in Europe, moving into countries like the UK and Germany where job opportunities and better pay beckon.
Some observers say that the idea that some migrants will enter a country solely to benefit from social programs without plans to earn income smirks of accusing immigrants of a crime of reliance on social programs for survival, while they are still searching for employment and recommend a period welfare can be terminated if such people do not show a willingness to be employed.
The United States is cited as a good example of a country where people who have been on welfare for a period are said to be losing eligibility for welfare, and where the president , Barack Obama, has appealed to the Congress for the country to restore the eligibility to the unemployed for reasons of hard economic situation.