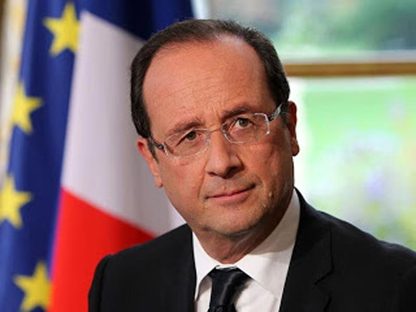 Francois Hollande of France
s The CNN  reported that the concert center where over 80 people were killed in Paris did not use metal detectors. It is one of the issues in debate aftermath of the killings in Paris on Friday. Aside from the seeming security lax, which may have allowed the terrorists easy access to kill innocent people, migration has come into the center of the debate in the search for solution to terrorism and the type of madness demonstrated in Paris by the ISIS's ideologues..
According to the New York Times, decision makers in some of the European countries are divided over whether or not to pull back on a policy of inclusiveness already near approval on migration, which would allow the current wave of immigrants from war torn countries opportunity to settle down in civilized countries. The proposal also reveals that the tide of migration from certain African countries is to be discouraged, first by encouraging countries that are sources of migration in Africa to create opportunities for  young people in their own country; secondly the program will also create scholarships and train stranded migrants in the sahel how to use sand and plastic to make blocks.
The discussions for solution after the attack on Paris depicts a world in crisis. The decision for the policy of inclusiveness for the wave of immigrants from war torn countries was taken prior to the attack on Paris, while the attack on Paris seemed to be about to upstage that decision. Some leaders in countries are reconsidering whether or not to open their borders for the wave of immigrants. Some of the countries have actually ordered the closure of their borders. Basically, lack of opportunities for young people in their countries of origin is responsible for mass of immigrants from Africa into Europe, aside from the current wave of immigrants from war torn countries.
It s understandable that lack of opportunities at home is the cause of large number of Africans crossing the desert and the sea to Europe without required papers. The program is thus targeted at encouraging various governments in Africa, whose countries have been identified as sources of illegal immigrants, to provide infrastructures and enablement for youth development, which would help at deterring the interest of young people from embarking on dangerous ventures such as crossing the desert and the Mediterranean sea, which has culminated into uncountable loss of lives. Therefore, observers see the rationale behind Europe's drive to discourage illegal immigration as essentially humanitarian.
But some African leaders don't seem to agree with Europe on the current program to deter illegal migration. President Macky Sall of Senegal said, "We have people who have often taken chances with their lives in terrible conditions, who have crossed the deserts and the Mediterranean and there had been thousands of deaths." Curious readers have said that the use of the word, 'terrible' by President Sall should not be linked to crossing the desert and the Mediterranean alone, but that it should also be seen in the light  several of the African countries to provide for the teeming masses, which ultimately causes many young people to take the risk to abandon their countries for the hope of  a better future abroad. In this case, the condition at home is better described as equivalent to death.
Thus, crossing the desert and the sea, even if it will lead to perishing is considered to better than facing what moral equivalent of the death at home. If crossing the desert and the sea will lead to eventual death, it becomes a better alternative than being alive at home, but metaphorically dead and only waiting to be buried. It is here that Sall misses the point by asking Europe to provide room for African immigrants, as if all categories of immigrants from Africa will be barred from Europe.Many observers think that African leaders are not even ashamed of the evil they are visiting on their people at home by the lack of infrastructure, access to education and employment.  Observers say  say that these are the three things that are absent in most African countries, which attract young people to travel abroad at all cost.
In the case of the wave of immigrants from war torn countries, Europe may have been in confusion, but the continent seems to have reasoned on allowing or respecting the letters of agreements on people seeking asylum in Europe. Many observers praise the decision of the European leaders to give room to Refugees from war torn countries the chance to survive and live. They urge European countries to beef up security against terrorists, who may want  to mingle with sincere Refugees to cross into Europe
Observers hail the standpoint of Poland, which has announced that  it will do everything humanly possible to secure the country against terrorists seizing opportunity of the open doors to cross into the country.
All said, people generally agree that everything necessary should be done to discourage the killings in the deserts and the Mediterranean sea. People are saying that if sending illegal immigrants back to Africa will achieve the objective, let it be. People are tired of reading all the time about people dying in the Mediterranean sea. On the other hand, Europe is encouraged to help Refugees from war torn countries settle down to a new life, but that each European country must ensure security of their citizens by ensuring metal detectors are available and in use in concert halls, movie theaters and restaurants that sit large number of people as it is already being done in major night clubs in the United States and other countries, to stop terrorists' mindless killings.
NEWS AND FEATURES
News & Features Around The World