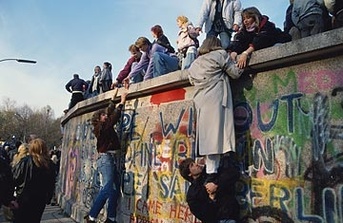 Berlin Wall following its collapse
Britain is remembering war heroes who have died fighting various wars from 1914, and Germany is in celebration of the Berlin Wall's collapse. The Berlin Wall collapsed 25 years ago. The remembrance in London is with pomp and pageantry,the Queen and family in trendy uniform like dresses, but the country itself is in quiet mood, news reports reveal.
German Chancellor, Angela Merkel, said Berlin's fall demonstrates that dreams do come true and that nothing is permanent. She has a ray of Hope for people in countries where rights are denied, saying there could always be improvement in people' lives.
The Berlin Wall was built in 1961 to prevent people from migrating to the west away from communism. The wall denied people their free movement and the freedom of choice. Following the wall's collapse in 1989, the Time magazine reported that for 28 years it had stood as the symbol of the division of Europe and the world, of Communist suppression, of the xenophobia of a regime that had to lock its people in lest they be tempted by another, freer life — the Berlin Wall, that hideous, 28-mile-long scar through the heart of a once proud European capital, not to mention the soul of a people. And then — poof! — it was gone
The Queen of England is in her full ceremonial dress, with members of her family and political office holders - from the British prime minister David Cameron who said the anniversary brought out the poignancy in the commemorations. News reports said two minutes silence were observed before the Queen laid the wreath at the cenotaph in London.
Observers are quick to remind the world that what is required to ensure God given freedom is for those who have the power to see the evil of war and human regimentation in any form. They say war heroes are remembered every year but wars are still being fought and people - not only soldiers are getting killed all the time and that the world has remained a machine in the hands of powerful people and the less powerful live at the their mercy. They say the Berlin Wall fell 25 years ago, but there still restriction of all forms - some are worse than the Berlin Wall - that have kept people away from freedom of choice and immigration problems around the world is the most topical debate today.
There are immigrants who have traveled to certain countries and have to flee to some other countries, because there are still countries without a type of Berlin Wall, but policies and human attitude toward immigrants form barriers worse than the Berlin Wall.
Just last week, a visit by Cameron to Finland reminded the world of the evil of restriction and immigration, when four leaders from the Scandinavian countries warned Cameron that immigration restriction against their own people would doom the European Union. It was not the first time that the issue of immigration restriction among members nations in EU had threatened the union. There is also the case of continuing mass death of immigrants forced to travel in ships across the Mediterranean Sea, because of tough immigration laws that have kept a large number of people from accessing formal immigration papers.
Several millions of people live as undocumented immigrants in the civilized world, yet Berlin Wall has fallen and the fall is celebrated every year, as if there is no worse evil than Berlin Wall oppressing the society.
NEWS AND FEATURES
News & Features Around The World