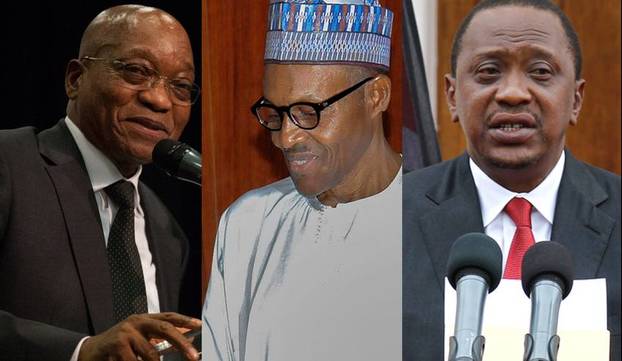 Zuma, Buhari and Kenyatta
Makhozi Khoza, ANC  member of Parliament in South Africa said she has not slept in her house since her vote in support of the vote of no confidence on President Jacob Zuma. She fears for her life and her children's lives.
The ANC is reportedly working to uncover the identity of members in support of the vote of no confidence against Zuma for punishment!
Yet, she is pushing forward with a criticism of what she describes as steps by the ruling class to force a  family dynasty on South Africa.
The presidential election result in Kenya shows a journey toward a repetition on of the deadly challenge among members of the ruling class over the result of the elections, reportedly won by the incumbent, Uhuru Kenyatta, son of the first president of the country, and lost by Raila Odinga, a former prime minister and son of a renown opposition leader in the country.
Now, Kenyans are praying against repetition of 1000 deaths and displacement of over 500,000. Though the winner of the election has made a plea to the loser for a peaceful transition for him to continue to his second term and to complete the work he has not concluded.
The Nigerian leader, Muhammad Buhari has been out of his country for over three months in search of medical care in London, a staple unavailable for poor Nigerians at home. Yet, his aides accuse people who ask questions about the president's whereabouts of committing a crime, because according to them the president has not committed any crime for abandoning the country and handing over to his deputy as acting president.
A demonstration asking the president to return home or resign was quelled by the police, whose fervent action almost them to be playing a role as personal guards of the president and not as as force paid from the tax payers money. Many Nigerian households have become poorer after the election won by the incumbent, who promised to take Nigerians to the promised land. Of course, he has been pre-occupied fighting corruption, and the welfare of the masses will depend on who wins the war between his government and corruption.
Back to South Africa, where the song among the people is titled "State Capture". Meaning that South Africa is now in the pockets of some powerful people, among whom are President Zuma  and a certain Gupta family. It is the development that wrecked holes in the country's artery. Yet, Zuma wants his former wife to be the ANC candidate who will succeed him as president.
It is here that Khoza's mention of the fight against family dynasty comes in. South Africans expect to see a brawl within the ANC in the fight by Zuma and the Guptas to force former Mrs. Zuma on the ANC and on South Africa. Whereas many ANC members are said to favor Deputy President Cyril Ramaphosa.
Effort at forcing family dynasty is not limited to South Africa. It failed in the United States with Hillary Clinton failure in the elections. Before her, there was the Bush family, which would have continued if Jeb Bush had succeeded against Donald Trump in the Republican Party primaries. It is the military and former leaders' dynasty.
They have been in power, they are holding on to power or want to hold on to power, for  their own selfish interest. It is the same cause of the endless war between Bashir al-Assad and Syrians who want him ousted. Assad's father seized power as a military officer, and the family has since decided to keep the country's leadership in the family.