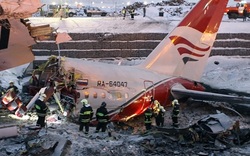 Remnants of an aircraft after a crash
A Boeing 737 belonging to Tartastan Airline has crashed on Sunday in Kazan, Russia, killing all 50 - 44 passengers and 6 crews on board. The aircraft traveled from Moscow and it was about to land in Kazan when it bursted into flames at 7.30pm local time.
Among the casualties in the crash are two children and a son of the president of the Republic of Tartastan, Irek Minnikhanov.
No reason has been given for the cause of the accident other than the aircraft had attempted landing twice indecisively, but it was the third time that came to a fatal end.   Russian President Vladimir Putin spoke to Minnikhanov on the phone, expressing his condolences to relatives and friends of the deceased, and to the Tatarstan leader personally.
Authorities and the airline’s insurance company will pay a compensation of around US$93,700 to each family of those killed in the plane crash. A mourning ceremony has been set for November 18.
Rescuers have already recovered the bodies of all 50 people from the crash site, according to Tatarstan's Disaster Medicine Center. Now they are looking for flight data recorders.
Kazan taxi drivers are reported to be offering free ride to relatives of crash victims to the airport, as an expression of sympathy to the victims and their affected relatives.