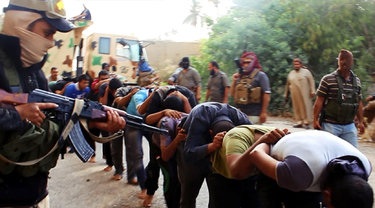 Some Iraq soldiers reportedly turned their back, when the militants entered the country. President Nouri al Maliki then charged an act of conspiracy. But today, photographs which authenticity is yet to be confirmed surfaced of Iraq soldiers lined up for execution by invading militants. News reports say that if the information is true, about 1700 Iraq soldiers may have been summarily killed by militants.
The development brings to the fore the new dimension in militant warfare, different to conventional warfare and the fear of summary execution, capable of making soldiers urinate in their pants on hearing the approach of militants, because whether a soldier fights or raises his hand in surrender, death is certain. The ISIS invaders are said to be in Baqubah, 60 kilometers to Baghdad.
NEWS AND FEATURES
News & Features Around The World