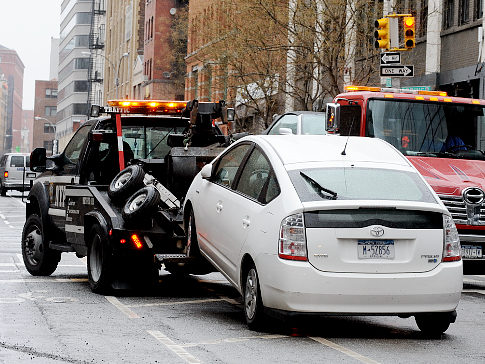 A twoed vehicle on its way to the Tow Pound (Courtesy:www.vosizeneias.com)
In the old South Africa, the story was about apartheid. There can be no comparison between New York City and the old South Africa, New York City being regarded as a citadel of freedom and equality.
No one will ever expect that there could be any place in New York City that is operated under the authority of the city government, and one that has a face of what looks like the old South African story or a reminder of the past in South Africa.
Come to the Tow Pound for towed vehicles on 36 Street and West Street in New York City with a segregated facility; one area for the government officials fully airconditioned and the other area for the traffic offenders without the air condition that government officials enjoy in their area of the facility. .
Here, government officials are in a form of a paradise, enjoying the coolness of comfortable atmosphere, while the traffic offenders are sentenced into an oven like existence. The eligibility for the visitation to the hellish tow dump is that offenders have been issued tickets and their cars towed away from areas designated as 'No Parking Anytime' or 'No Standing Anytime' areas. Motorist can also fall foul of parking regulations in alternative parking zones, when a car is parked outside the time zone that parking is allowed. Police officers have been accused in the past of aggression to fulfil tickets quotas they are expected to issue to bring money to the city.
When a motorist parks his or her car in any of such areas, the vehicle may be towed away in a twinkle of an eye. It costs $185.00 for a motorist to regain a towed vehicle that ends in one of the government tow dumps in the city, like the one on 36 Street and West street in Downtown Manhattan, in addition to $115.00 ticket issued for packing in a wrong location.
The punishment for wrong packing in the city does not end with the payment for motorists to regain their vehicles and the tickets, the motorist will also have to endure staying on a queue in an oven that the government has reserved for offenders. It is a condition that quickly prompts a question about why government officials have air condition in their own area of the facility and the public area is made to be a hell.
And someone on the queue says that the situation is made harrowing for the public, because there is no one to pay the bill to make the place comfortable for offending motorists. "This is not a place you come wearing a suit. if you have driven out of your home and your is towed away and you have need to come here, throw your jacket away for the period you will stay in the oven to regain your car," a first offender motorist, who said it is his first time there, said. He is dressed in a suit and he is perspirating profusely.
Other motorists, who are unfortunate to have their vehicles towed, both male and female, also complain of the discomfort motorists go through, to regain their vehicles from the dump. They complain about the heat in their part of the facility and wonder aloud how on earth New York City allows two worlds in one facility. They say it is not a case of the air conditioner on one side working and the other having a fault and getting switched off, but that it is institutionally made that way. There a notice in the facility that no one should take photographs or do any video.
Packing is another oddity in which ordinary people have been sidetracked. A guy packed his new purchased Honda Odyssey in front of a luxury apartment building in Downtown Manhattan to briefly attend a meeting. Although, he say there is a 'No Packing Anytime' at the location, but that he has packed there, because there are other cars in park at the location. He is shocked his car disappears under three hours, and other cars untouched.
He later realizes that he has committed an offense not necessarily because of the 'No Parking Anytime' notice, but because he is not a tenant in the luxury apartment building or a visitor to any of the tenants in the building. This preference to allot parking spaces to companies and other powerful people in government is obvious all over the city, where the VIPs and organizations enjoy parking spaces in alternative parking arrangement locations. Police officers, in and out of duty, can also park their cars without getting tickets, while only ordinary people are targets of parking tickets all over the city.
A female officer at the Tow Dump said that a whole lot of young and old people have abandoned their cars at the dump. According to her, after some people have amassed many parking tickets and they cannot pay up, the authority auctions the cars. Of course, the officer said that all motorists need to understand is that the city is ruled by law and that motorists should obey. all no parking notices, wherever they are posted. It is this she says has made owning a car to become burden in the city than luxury.
"Vehicles can be towed if they are parked illegally or if you owe more than $350 for parking tickets or camera violations that are in judgment," a statement on New York City's official website says.
NEWS AND FEATURES
News & Features Around The World