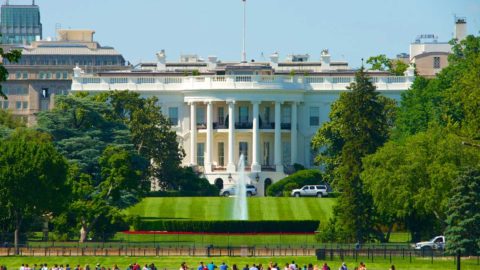 The Berries from here have no comparison to other Berries from other parts of the world (Courtesy:OldTownTrolleyTours)
Every American believes in the need to drain the Washington swamp, as part of necessary change toward progress that will positively affect all.
It is agreed among Americans that there is a high level of corruption in Washington, benefiting lobbyists and politicians, and leaving the voters out of the goodies.
Many Americans say it everyday that politicians go to Washington after every election to do business as usual and forget about voters' interests.
They say no politician go to Washington to become poor or poorer and that the Washington magnet is the lure to make it bigger.
The noise to drain the swamp got louder in the last campaign cycle with Donald Trump as a non-professional politician promising to straight things out in Washington. Many observers believe and agree that his choice of campaign rhetoric has led to his victory in his party's primaries.
The party's voters want Trump to go to Washington and drain the swamp. But he has a stout opposition from the status quo in Washington against draining of the swamp. The opposition has become thicker with time, notwithstanding Trump's victory in the election.
The opposition from the Democratic Party, liberal organizations and the liberal media outlets have assumed a war dimension, with liberal billionaires bent on ensuring Trump's failure said to be behind endless public protests against his election and policies. But they seem to have met with a good fighter, whose victory in the election was won through hard fighting.
The Republican Party's decision to support the president elected on its platform has somehow made the odd against Trump lesser, compared to what it would have been if he is taking on his party and the liberals. But the fight is still hard because the Democratic party and the liberals are working toward removal of the president from office.
They liberal opposition feel emboldened that the president is a Washington rookie and various voices from the liberal media have said from the beginning of the president's election that he is prone to make such mistakes that will help  to enhance calls for his removal.
All forms of propaganda have been drummed up against Trump. The only one left standing is the allegation that the Russians may have colluded with Trump campaign in the Russians' hacking act against the Democratic Party and the party's presidential campaign chairman, Podesta.
Whether the liberals will succeed in draining Washington of the new comers or the new comers will succeed in draining the swamp is a matter of time to know how will succeed in the draining job. The fight depicts a brawl for control over Washington Berries. Liberals will say the fight is to ensure scrutiny. Democrats had enjoyed the berries for eight years. They thought the enjoyment could continue, but the election result threw the thought into the oblivion.
The new comers have started their draining job, but the powers of yesterday are fighting hard to stop the draining. Instead, the powers of yesterday want to drain the new comers. The new comers have said that they are being sabotaged. But the Democrats in their claim that Russians may help their tormentor seem to have lost track of one fact that the Russians hands have not been seen in Trump's defeat of the 17 Republican presidential candidates in the party's primaries.
Yes, Trump lost the city votes to the Democrats and the other American star powers on the side of the Democrats, but that he successfully beats his opponents silly in the battleground states. People are saying It is possible that the same Russians may have helped Trump's loss to the Democrats' victory in New York, California and other major cities that gave the democrats 3 million votes over Trump.
They Democrats and their liberal counterparts have thought about the need to champion a call for the changing of the constitution, because the constitution says that you have to win the battleground states to become president, no matter the number of votes you have in the cities. Seeing that championing a call to change the constitution will not push the nemesis away from Washington, the Russian collusion  theory remains the only way out.
People are watching to see how the Democrats and the liberals will end up in their fight over the Washington Berries, because people say the Trump the Democrats and the liberals  are engaging in this fight is a fighter, and that he has won not a mean fight to conquer the Berries from the Democrats.