Flynn on trial and Comey on trial 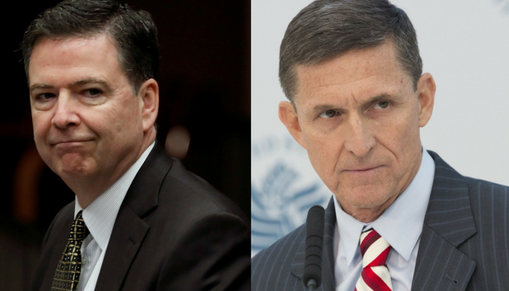 James Comey and Michael Flynn
James Comey is still very much in the news as a news maker meeting with law makers from both parties behind doors. Comey is defending his time office as FBI director. And Michael Flynn, former National Security Adviser, appears in a court for sentencing for lying to the FBI.
News reports say that Flynn told the court that he lied to the FBI, amid a controversy over an alleged flawed procedure employed by the FBI in Flynn's interview. This has raised a question about why Flynn's admission than denying an earlier guilty plea. Further raising a question about any other problem Flynn may want to avoid for accepting to go down without a fight.
The judge has also said in response Flynn's admission of lying to the FBI that it is a very grievous offence for a senior serving government official to knowingly tell a lie to the FBI. The nation awaits Flynn's sentencing. A former senior military officer who had served the nation meritoriously. A news analyst Fox news said that Flynn's fate is the culmination of leaving the military and becoming a celebrity and a star,
No one seems to know whether there is a much more serious issue that Special Counsel Robert Mueller's office has from information and cooperation given by Flynn that can be a bomb or a connection to Russia's collusion. But people are saying that if the special counsel's office has such a bomb, the office will not be withholding such information, while sentencing Flynn for telling a lie..
The special counsel office had recommended little or no jail term for Flynn, because the office said Flynn had cooperated with the office, people are wandering about a statement that Flynn had sold his country. Is this for lying to the vice president in the White House? However, it is clear that the office of the special counsel has not made any clear statement about establishing a collusion.
Flynn has got delayed sentencing from Tuesday's hearing based on his lawyer's request, because Flynn is said to have other cases by the special counsel in which he will stand as a witness, but not about collusion. For Comey, a time of celebration may be nearing an end as law makers are scrutinizing his time in office, with so many question marks over a dossier that has led to the whole scenario about the Russian collusion.
​
Comment Form is loading comments...
NEWS AND FEATURES
News & Features Around The World