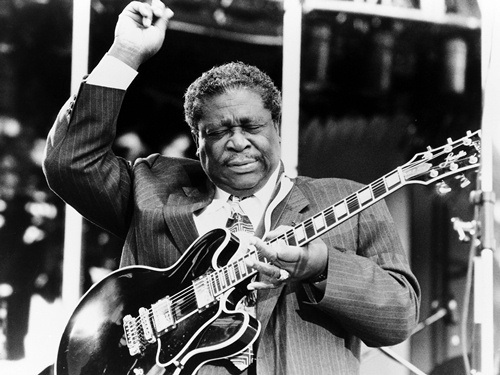 B.b King with his guitar and fingers that does the work in the air
B.B King, the king of blues song died at 89 during the week. What killed B.B King? News reports said he had diabetes and that he had been in a hospice or nursing home and that death came from complication of the diabetic situation, according to his doctor. There was no line that said B.B King died in good old age.
At 89, reports said, B.B King was still playing and he actually cancelled a schedule shortly before he died. Shouldn't it be recognized that this man died at good old age, considering the age people die these days?
Obviously, part of the lines that stand out in B.B King's story, apart from his death in good old age, is that of a man born in a shack surrounded by dirt-poor sharecroppers and wealthy owners, but who went out of his birth circumstances and never came back.
According to Tim Weiner's report in the New York Times, B.B proved that music is a form of communication art, in which the player cannot be alone or disregard his audience, but adapt and give them what they like and one that will make them stick to him, as an artist and a singer.
Secondly, B.B King influenced many of the most successful rock guitarists of the era that include Eric Clayton and Jimi Hendrix.
The story line also shows that B.B King found his voice, and the voice rhymed with his songs and guitar works, and worked marvelously with his fingers on the guitar regardless of the pain, which was often manifest on his face.
Finally, B.B not only defined the blues for his generation, but he also defined himself with the way he rose from the dirt strewn background and became a star, whose influence in the musical world became manifest many years before his death.
NEWS AND FEATURES
News & Features Around The World