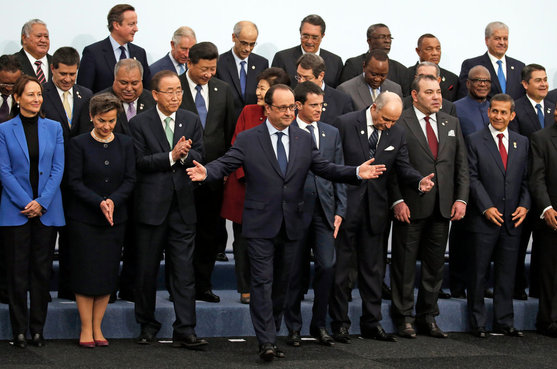 World leaders gather in Paris for the climate conference
It is unexpected that France will do this two weeks after 130 Parisians paid the supreme price for freedom and liberty.
*     *        *        *         *        *        *
Paris effectively returns into the news with the gathering of leaders from around the world in the city for the world climate conference. As the leaders arrive and driven into the city, there have been news reports about fierce encounters between law enforcement and protesters.
More than three hundred protesters have reportedly been arrested by police. Sidewalks in the city normally occupied by a large number of commuters are said to have been swept clean, as part of security measures, toward  ensuring tight security for visiting leaders.
Meanwhile, visiting leaders are reported to have visited various venues of recent attacks in the city. American media showed President Barack Obama at the theatre, where over 80 people were killed, laying  a wreath of flowers and bowed his head.
The Paris news has resurfaced, after the cooling of the news and analysis about the downing of the Russian jets, and  the confusion about the negative effect the downing of the jets may have on cooperation among world powers against the ISIS.
Just as the news of the leaders' gathering is flashed across various television screens, the news about one of the attackers, Jihadi Saleh Adelslam, still being sought by the police is also having a shot in the news . Some of the news focus ask  whether the attacker, said to have purchased a detonator from a local firearms store before the attack is still hiding somewhere in Paris or Belgium, and other news focus speculate that he may have escaped back to Syria. Obviously, police is still hunting for this lone escapee, while news focus has not departed from the plans by the attackers to create more havoc had the police not moved in and did what was necessary.
It is real that apart from the bravery shown by President Francvois Hollande, announcing that France would still take additional Syrian migrants from war torn Syria, notwithstanding that the attackers who wrought havoc in the city two weeks ago are Syrians, the city is still in fear because the has said it intends to focus its targets on France for the meantime. But security analysts have said the ISIS's statement is far from being reliable, because there is no way terrorists can focus on a particular area without detection, since security is bound to be beefed up in the areas it has announced to focus its attention. But rather, analysts are saying other cities in other countries should step up security to avoid being caught unaware.
The said that if France had known terrorists were going to strike the day terrorists killed over hundred people in Paris, security would have been in place and the Parisians' near Armagaeddon  experience would have been avoided and lives saved. Observers has not faulted the tight security given to visiting leaders by France being part of protocol, but curiosity requires that every country should give same attention to ordinary people as done in the case of leaders. It is noted that so much money is voted for leaders' security from tax payers' money, and that these same tax payers also require extensive security coverage and not just sympathy each time they are caught down for lack of enough security coverage.
For example, the mass arrest of protesters is said to be part of security measures to safeguard leaders from being target of jihadists, since one of the Jihadists who carried out the attack a fortnight ago is still on the run and feared to be either in Paris still or somewhere in Belgium or Germany, though some people say he may have escaped back to Syria. Police action  is reported to have manifestly infuriated protesters, who are seen throwing stones and whatever they can lay their hands at the police. France is not known as a country to be anti-demonstration - a salient part of the culture of  freedom and democracy. Most of American writers in the early part of the century chose France as their home, partly for the culture of freedom, which was then absent in America. The Lady Liberty Statute that sits in Ellis Island in New Jersey - a symbol of liberty - is a gift from the French people to the United States, in recognition of Americans' valor and the fight for freedom in the face of tyranny.
People demonstrated in Manhattan in New York City the same way that people demonstrated in Paris, calling on the city to speed up its acts in climate defense . And no one was arrested.
People feel and say it is a shame watching police and demonstrators fighting on the street of Paris, because authorities want to ensure adequate security for visiting leaders and demonstrators have to be made to abandon their culture of freedom to air their views, all in the bid to secure visiting leaders. The most people would expect in this situation is for the leaders to be restricted to the conference venue, the purpose for which they were in the city, than coming into the city for any other purpose. People ask whether it would have been against protocol, if say the leaders don't come and visit venues of the attack around the city? They say terrorists are up in arms against people's culture of freedom, and by our own acts, for the want of tight security for our leaders, we are aiding the terrorists to achieve their aim against the culture of freedom and democracy.
It is unexpected of France to be acting this way, two weeks after 130 Parisians paid the supreme price for freedom and liberty.