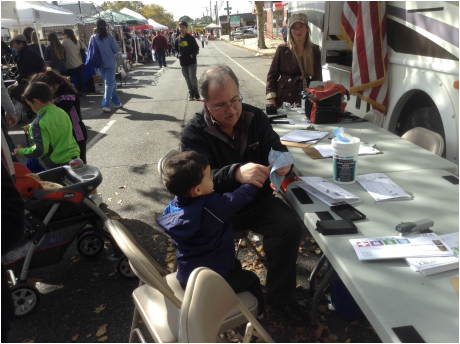 An official of Town of Hempstead administering fingerprint on a child in a child safety program
October 19 witnessed a large number of vendors and buyers at a street fair on Franklin Ave., Long Island in New York, despite the chilly weather. The 15 blocks space for the fair was filled with vendors and residents, selling and buying gift items, housewares, make ups, real estate, banking, Jewelries, clothing, cosmetics, music and movie posters. There were also the Nassau Kings Wheelchair basketball team, a car show of old automobiles and friends of the Franklin Square Public Library.
Music was supplied by the Natural Red Band and led by Vinny Laz. Beside the entertainment galore that started a little late, Franklin Avenue Kiwanis Club chairman, Michael Fusco said the fair was to bring the community in Franklin Square area together and for vendors to showcase their products and make some sales. Towards this end, he said two fairs are held in the area - one in the Spring and the second in the Fall.
He said the Kiwanis has been running the June fair for 12 years and it took over the October fair from the Alliance Club three years ago. "If Mother Nature works with us, it will be a successful day. Right now, it is little windy, but it is drier," he observed. But as the time ticks away, the weather got better and people trooped into the fair like a running stream.
The Chamber of Commerce Vice President, Bill Youngfert said the fair will promote local and small scale businesses in the area. Enquiries, bargaining and sales began in earnest.
"Do you have any house for three hundred thousand dollars in this neighborhood?" Linda Kwan a Franklin Square resident asked a Century 21 representative, Francisco Lazaro. "We can do it. We need to sit down and talk. It is not impossible, but we have to sit down and talk about your expectations, finances and other factors," Francisco explained to Kwan's satisfaction.
Maria Becker of the Exit Strong Realty confirmed Francisco's position about possibility of getting a house in the amount in Kwan's enquiry in Elmont area, but that the price may get higher closer to Franklin Square, and that the amount cannot get a garage in the Garden City area. Some observers quickly jumped at the possibility of buying houses at Elmont and sought for more information.
On a lighter note, Christine Mitchell and her husband, Jim, who had a sign "No woman ever shot a man while he was doing dishes" said they produce and sell stuffed animals like monkey toys. They had other signs such as "Lead me not into temptation, I can find it myself" and "To fish or not to fish, what a stupid question". Christine said that occasionally some women want some break and they would not mind for their men to do dishes, though not all the time. She pointed to another sign that says "The Things I Love" and that as a woman she often loves help in doing dishes.
Pat Galaskas of friends of the Franklin Square Library said money realized from sales at the library's stand at the fair goes toward the library's program. At the Town of Hempstead's stand, a program for child's safety through collection of personal and medical information and finger print to help police work in case of loss came handy, Bianca Laveglia explained.
"The fair is good. It is busy. We are not selling anything. We only meet people." a representative at Edward Jones' stand said. However, another representative at H.M.O.C, producer of artisan handmade soap and body products from Central Islip said business was slow, and that the music should have started earlier and not later at 1.00  pm.
Josh Evolve selling Solar energy said, "It is fine today. People are receptive, they are  interested and want to know more about solar energy.
The Astoria Bank and  the Ridgewood mobile banking were conspicuous on display. Ridgewood for those who desired money from an ATM, while Astoria's staff were busy talking to people about their products.
Patrick, a potter from Long Beach said his mugs were made of high fire stone ware without lead glaze; microwave and dishwasher safe. On display at the Music And Movies' stand were postals of stars like Marilyn Monroe, Arnold Schwarzenegger, The Beatles on Abbey Road and New York Rangers.
Terence Curan who works as EMT technician said he was at the fair helping mum on TNM stand; selling wrist watches, necklaces, mugs and wreaths in various dimensions for people with a new baby girl, for the Fall and Christmas season.